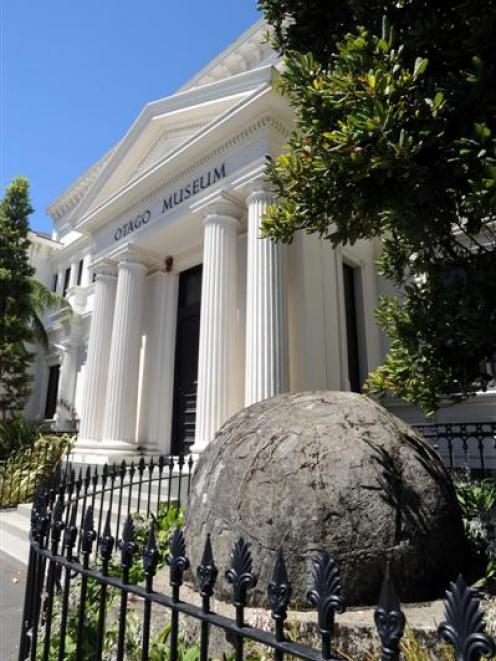 Photo by ODT.
The Dunedin City Council has signalled a funding increase for Otago Museum, but stopped short of a request for more than $1 million over the next decade.

Instead, councillors at yesterday's pre-draft long-term plan meeting voted to contribute an extra $300,000 over the next four years to the museum's books.

They also agreed to consider linking future funding increases for the cultural institution to the Consumer Price Index (CPI).

The moves came despite a warning from Cr Richard Thomson, who worried that could add hundreds of thousands of dollars each year to the council's already tight budget in future years.

Councillors made the decisions after considering a staff report outlining the museum's planned projects and improvements over the next decade.

The multimillion-dollar plans would begin with construction of a planetarium later this year, followed by a revamp of Discovery World and the redevelopment of other galleries.

That included redeveloping the Tangata Whenua gallery, as a priority, in time for the museum's 150th birthday celebrations, museum director Ian Griffin told the meeting.

Together, the projects were expected to cost the museum more than $9 million, and a contribution of $1.025 million from the council was requested, staggered over the years to 2025-26.

That would be on top of $4.1 million already received from four local authorities, including the DCC, which provided 93.6% of that, or $3.843 million, the report by council services and development general manager Simon Pickford said.

The rest of the museum's funding came from its commercial operations, including admission fees for Discovery World.

Cr Lee Vandervis was the first to back the request, saying it was ''one of the rare occasions'' when ''relatively small amounts ... would be a wonderful investment for Dunedin tourism''.

However, other councillors disagreed, including Cr Thomson, who said he was ''quite cautious'' about including so much funding, so far ahead, without more detailed information.

He also worried adjusting the council's museum funding by CPI each year would add hundreds of thousands to the council's costs each year, totalling more than another $1 million over the next decade.

''These are not small sums of money,'' he said.

''There's no business case being put in front of us for any of these things. I don't feel very comfortable about that, given the amount of money we have got to play with.''

Instead, he supported a smaller contribution spread over four years, giving the museum some certainty while other contributions were considered later.

Other councillors agreed, including Cr Vandervis, who withdrew his earlier support for full funding over the next decade.

Dunedin Mayor Dave Cull said he saw ''enormous merit'' in the museum's plans, which had the potential to be of benefit for the city in economic, cultural and other ways.

However, he could not support ''just putting the lot in'' to the council's budget, without more information about the museum's plans.

''Our knowledge of it gets more vague the further we go in.''

Councillors voted to approve funding of $75,000 a year for the next four years, tied to the first six projects on the museum's projects plan.

A report on the implications of CPI-based funding would also be prepared by council staff.