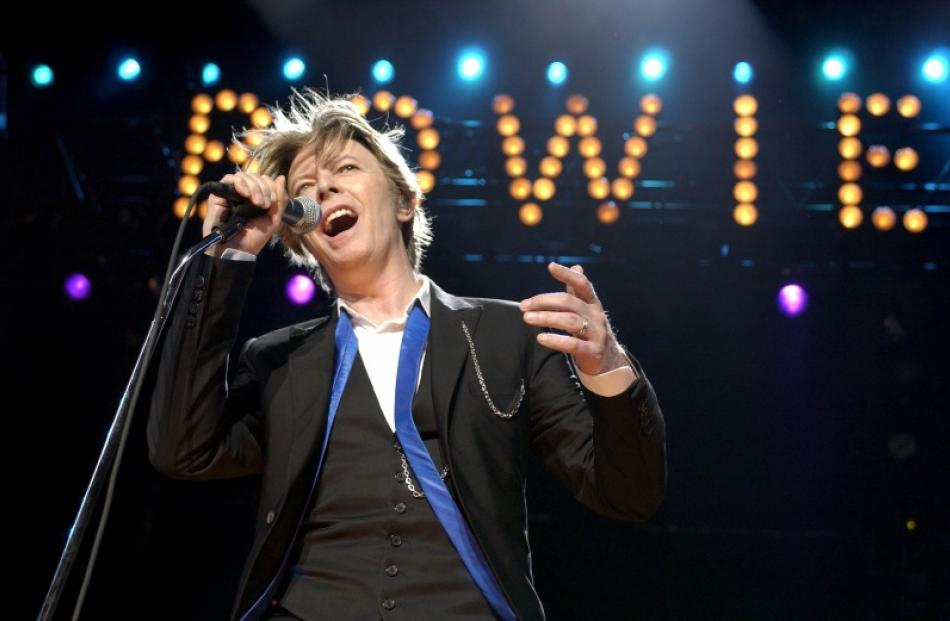 It was confirmed last night the legendary musician - singer of Space Oddity and creator of Ziggy Stardust - had died of lung cancer, aged 69.‘

"David Bowie died peacefully today surrounded by his family after a courageous 18-month battle with cancer,'' a statement on Bowie's Facebook page read.

The news triggered an outpouring of grief in Dunedin, where Otago Boys' High School teacher and music writer George Kay said he was "absolutely shattered''.

Mr Kay, whose list of star interviews for Rip It Up magazine included Mick Jagger, Neil Young and Yoko Ono, recalled a 45-minute phone interview with Bowie as "absolutely'' a career highlight.

Mr Kay told the Otago Daily Times he was a "huge fan'' of Bowie's music, having seen him perform in Christchurch, Wellington and Auckland.

He had also met Bowie in person at a press conference in Christchurch while writing about the star's 1978 New Zealand tour, and later interviewed Bowie's band - but not the man himself - during his 1983 tour.

But it was the sprawling telephone interview with Bowie, speaking from London in the mid-1990s, that remained in Mr Kay's memory.

Bowie had spent the first part of the interview trying to recall their previous meeting, and then pretending he could, speaking in his ‘‘extremely affable'' thick London accent, Mr Kay said.

But he also displayed his philosophical nature, fretting about a significant upcoming birthday, Mr Kay recalled.

"He was asking about what was the meaning of life? What was it all about? ... he was quite philosophical in many respects, but I think that was the way he was. He thought about everything he did, pretty much.''

The lengthy interview later formed the basis of a series about Bowie, prepared for National Radio.

Mr Kay said Bowie's death was "tragic'' so soon after the release of his latest album, Blackstar, but his music would live on.

"He owned the 1970s. If you look at his output, what he did was absolutely unbelievable, from electronic stuff to glam to the funk stuff.

"His lasting legacy is he wrote some absolutely phenomenal songs, advanced rock and roll through a lot of different phases and stages, created glam music, then ended it, and just was prepared to try things.

"The guy was absolutely one of the greats - one of the few geniuses in rock'n'roll.''

Bowie was born David Jones in Brixton, south London, in 1947 and enjoyed a career spanning five decades, from the 1960s and Space Oddity through Ziggy Stardust and his outrageous costumes of the 1970s to his later incarnation as a soulful rocker, the BBC reported.

He kept a low profile after undergoing emergency heart surgery in 2004, but surprised many with the release of The Next Day in 2013, on his 66th birthday.

He marked his 69th birthday on Friday with the release of his last album, Blackstar, which dealt with themes of illness and death.

University of Otago music lecturer and die-hard Bowie fan Dr Ian Chapman, who has written a book and taught a paper about the musician, said he was "one of the most important artists in the history of rock'n'roll music''.

Bowie "blew apart'' what it meant to be a rock star with the release of The Rise and Fall of Ziggy Stardust and the Spiders from Mars in 1972, Dr Chapman said.

"His approach was to take an actor's approach to rock music, which was totally new.

"He changed the face of rock'n'roll.''

His influence went beyond music to movies, theatre and performance art.

A big reason why Bowie was such a hero to him was that he made "being different OK''.

"For me and many other people I know, Bowie has been a real champion of the alienated and the marginalised.

"Part of the whole appeal when he was [alter-ego] Ziggy Stardust was he looked so outlandish that anyone else who felt marginalised by way of their sexuality, gender, or age felt empowered by him because he was saying it was OK to be different.''

His death came as a shock so soon after the release of Blackstar, but in a way it was no surprise he managed to keep his battle with cancer hidden from the public.

"He was very good at that; when he came out with his surprise album , no-one knew he had been recording.''

Dr Chapman was yet to listen to Bowie's latest album, but it would take on a special significance when he did in the coming days.

● David Bowie wowed New Zealand fans four times during his career. He visited first in 1978 on the Low/Heroes World Tour, then in 1983's Serious Moonlight Tour, the Glass Spider Tour in 1987 and A Reality Tour in 2004. Did you attend one of these concerts? Send your David Bowie memory to reporters@odt.co.nz.

Very sorry and sad to say it's true. I'll be offline for a while. Love to all. - Duncan Jones (David Bowie's son)

Making a record and a music video while fighting cancer, releasing it 2 days before his death. An artist like no other. #DavidBowie - Lizzie Marvelly

David Bowie was one of my most important inspirations, so fearless, so creative, he gave us magic for a lifetime. - Kanye West

RIP David. I loved your music. I loved you. One of the greatest performance artists to have ever lived. #sorrow - Russell Crowe

It's not often I cry at the loss of an artist but I'm devastated. He meant so much. Goodbye David Bowie and our youth. We loved you. X - Marc Almond

Never imagined a world without him. He has ascended into the cosmos from whence he came. Farewell, David Bowie - Elijah Wood

When I was 15 and John Lennon died, I locked myself away for 2 days watching Beatles vids on VHS. Might do something similar now #Bowie - Alison Mau