Fashion sense and a head for business

Kester Black company owner and Otago Polytechnic graduate Anna Ross says it is important young women are financially literate. Phots: supplied.
In seven years, Anna Ross swapped a flat on Castle St for her own business in Melbourne and added  the title of young Australian businesswoman of the year to that of Otago Polytechnic bachelor of design (fashion) graduate.

The Mornington native (29) said a love of fashion and determination to succeed propelled her to where she was today.

"There were 30 of us going through this class and I just thought I need to be doing more to pick up skill.

"I guess my logic and reasoning was I am going to be graduating with 30 other people, we are all going to be going for the same jobs because New Zealand is a small place and if I had something extra to show on my CV then I’d get looked at."

However, it was not at polytech, but while she was a pupil at St Hilda’s Collegiate School that she began  learning  fashion skills that made her stand out from the pack. 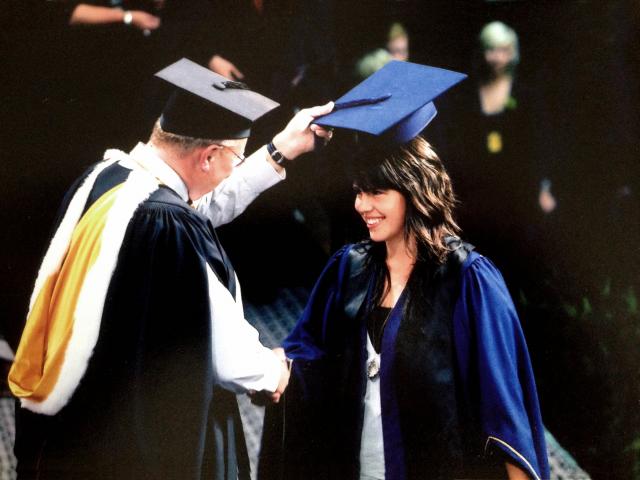 Anna Ross graduates from the Otago Polytechnic with a bachelor of design (fashion) degree in 2008.
An internship with  Dunedin jeweller Ian Henderson making "little  sterling silver rings by hand" during high school was followed by having a menswear range in Dunedin fashion boutique Slick Willy’s while she was studying at polytech.

In 2008, a financial request by the ambitious fashion graduate was turned down, something which changed her career course.

"I asked my mum for $40,000 to start a fashion label. She said no. She said maybe you need to go overseas and get some work experience, because there were no jobs in New Zealand in the industry going at the time."

In 2009, flights to Melbourne were cheaper than flights to Wellington, a fact which  determined where she would spend the next  seven years of her life.

She acknowledges that life in that city was not easy.

"As soon as I got to Melbourne, it took me longer than I thought to get a job in the industry, so I thought to keep my skills ticking over I will create a jewellery range and then be able to show employers that I’m adaptable and can work across different mediums."

The sterling silver, handmade, limited edition range was "really successful" and ended up being sold by 25 stockists across New Zealand and sold at Life with Bird boutiques in Australia.

Despite the success of her jewellery, it was 18 months before she tapped at the door of the Melbourne fashion world.

"It was really hard. A lot of places wouldn’t hire me because I didn’t have Australian experience, like work in New Zealand didn’t compare with it, which is totally untrue.

"But I think I had an advantage, actually, because all of the students applying for jobs here coming from RMIT either have [only] design or production and at Otago Polytech we got both design and production, so I was really way more highly skilled than most of those graduates, actually, and I just had to work out how to talk the talk."

Her willingness to back herself meant she could tell some who doubted her they were wrong.

"When I applied for the job they said, no, I didn’t have enough experience.

"I emailed them back and said, ‘No, I do, you should interview me’."

The approach won her a design assistant position ahead of 19 other applicants.

Following stints working across the industry, including being the production manager of bridal couture label Mariana Hardwick, she became disillusioned.

"I just think that people get treated so badly and the whole system just sort of went against my values, really."

In 2012, she returned to jewellery-making and experimented with colouring sterling silver.

"I wanted to colour silver jewellery and you have to do that using enamel paint and I thought it would be cool to make some nail polishes to go with the rings.

"Within three months, we tripled our turnover so I stopped jewellery and started doing nail polishes."

Her eye for business has become as honed as her eye for fashion.

"One of the core things I learnt at polytech was how to do a proper costing, so that was really important and I have always used that original sheet that we had ...

"But I feel like you don’t start your own business knowing. You’d never start a business if you knew what was involved. You pick it up along the way.’’One of the key lessons she learnt  was to value your staff.

"I worked for this quite well-known fashion label and I was getting paid $35,000 and I was working 80 or 90 hours a week, so it worked out to be about $6 an hour and I complained too much about it. I got fired."

Working in an environment in which she "cried every day for a year" meant she was determined her staff would never turn up to work feeling sick about being there.

At Kester Black, staff do not work on their birthday, are taken out for dinner during their birthday week and are encouraged to meditate and do yoga, she said.

She also fosters her relationships with Otago Polytechnic staff.

"If I’m in Dunedin I’ll let Margo [Barton] know and she will organise for me to go and speak to the year-threes about brand building."

Despite her unwavering confidence in her brand and ability, she said she was still surprised to win the young Australian businesswoman of the year award.

"I feel like it is a bit of pressure because now I have this opportunity and I totally need to utilise it. It would be a waste if I didn’t use the contacts I made."

The title was "really empowering" and meant lots of people had approached Kester Black saying they wanted to work with the company, but the biggest result was yet to come.

"More Cents is sort of like the big daunting thing I am worried about now ...

"There are a lot of people involved in it, though, and a lot of these people are mothers who just want to see this project run because they want their children to go through it so they are financially literate."

She was adamant her business would continue to grow, but believed her environment might change.

"I have built my business so I can work from anywhere in the world.‘‘I would like to return to Dunedin in the future."

Name of course at Otago Polytechnic

Ended up in retail, jewellery, fashion and now beauty.

Favourite memory of living in Otago

I loved that everyone was just a short walk away! I also loved not having a car and being able to walk from my flat (on Castle St) over to the polytech.