Fat but fit - a weighty issue 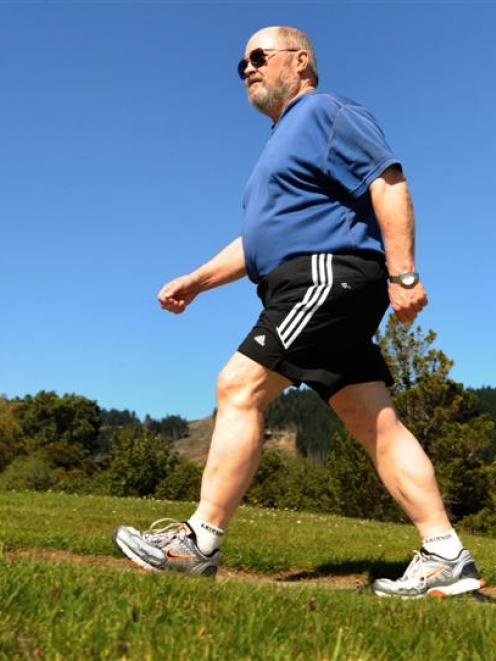 Prof Steven Blair keeps the grim reaper at bay by taking a walk around Dunedin's Northern Cemetery. Photo by Peter McIntosh.
A controversial exercise scientist from the United States is running rings around the age-old "myth" that if you are overweight you are unhealthy.

University of South Carolina Arnold School of Public Health Professor Steven Blair is one of six leading keynote speakers on the subject at the University of Otago School of Physical Education Symposium "The Big Fat Truth: What are we weighting for?"His research focuses on lifestyle and health, especially on exercise, physical fitness, body composition, and chronic disease.

Prof Blair has undertaken dozens of studies on thin and overweight people in the United States and found a normal weight person who is unfit is twice as likely to die in the next decade as a person who is overweight and fit.

"I am controversial if you talk to members of the obesity mafia.

"I've been studying the cause of death in a select group of people for over 30 years and I've found that a sedentary lifestyle accounted for more deaths than anything else."

Prof Blair said he, himself, was overweight, but maintained he was healthy because he was fit.

Not only have his views caused a stir in the United States media, they were also challenged by several delegates at his keynote lecture at the University of Otago College of Education auditorium yesterday.

Prof Blair said there were many misconceptions about how much activity was required to meet these objectives.

"Walking for 150 minutes each week would make a person fit and produce a protective level of fitness.

Prof Blair will give a public lecture today at 5.30pm in the College of Education auditorium titled "Physical Inactivity: The biggest public health problem of the 21st Century".