The serious state of neglect in Aurora’s electricity network has the potential to kill Dunedin residents and leave the city with a power crisis like that of Auckland in 1998, a former Delta employee says.

For the past seven years, Richard Healey has worked for Delta, which manages the Aurora electricity network in Dunedin and Central Otago.

But last week he quit his job over concerns about the state of the "neglected and decaying" network, and believed it could cost up to $100 million to fix.

Of particular concern was Delta’s inability to keep up with the replacement of rotting power poles.

Former Delta employee Richard Healey. Photo: Craig Baxter.
Aurora Energy has said it would invest more money into its pole maintenance and replacement programme, and had contacted the Energy Safety Service to organise a compliance and safety audit, in a bid to ensure Aurora Energy’s infrastructure met safety requirements. 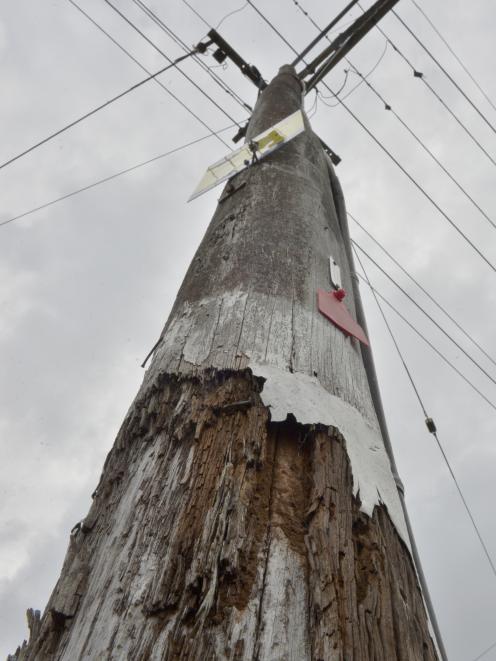 A red-tagged power pole in North Rd near Dunedin North Intermediate. Photos: Gerard O'Brien.
Mr Healey said the Electricity Safety Act 2010 stated power poles that  were in poor condition had to be red-tagged and classified as either "Condition One  — not fit for design load" which meant it could fall down if the wind blows; or "Condition Zero — not fit for actual load", which meant it could fall down without any environmental influences.

The law states Condition Zero poles have to be replaced within three months and Condition One poles  within a year.

There are about 54,000 poles in the Aurora network, supplying electricity to 86,400 homes, farms and businesses in Dunedin and Central Otago.

Mr Healey agreed there were about 1000 Condition Zero poles in the Aurora network, the bulk of them  in Dunedin, because the asset was "particularly degraded there".

He disagreed with the Condition One pole count. He believed there were closer to 2000 poles in this category and that there were many poles which did not have red tags on them when they should have.

"In total, there are about 3200 Condition One and Condition Zero poles. That’s a concern. The magnitude of the problem is fairly large." 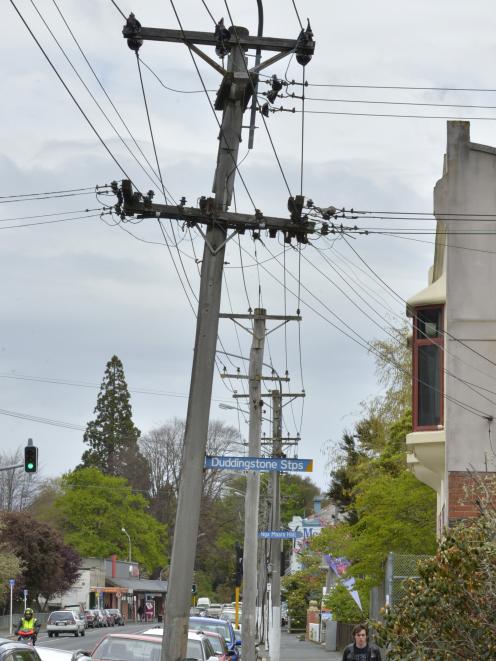 Mr Healey said the company was struggling to keep up with the replacement of the deteriorating poles.

"Now the significance of that is there are about 34,000 poles in Dunedin, and they last for a median of 54 years before failing.

He said much of his frustration with Delta and Aurora was they did not want to believe the problem was as big as it was.

"God knows where the disconnect is. I’ve seen documents which say it will cost $100 million to put this right."

Aurora’s asset management plan said there had been 68 incidents recorded as either high or extreme risk between April 1, 2015, and April 1, 2016.

It noted failed poles and "conductor down events" accounted for 80% of that total.

Mr Healey said falling poles were a real hazard in his profession, and had already killed a staff member — Roger Steel, who died after the pole he had climbed fell over at Millers Flat in December 2010.

He  was just as concerned about the  danger the poles posed to the public.

"The danger  is more around the lines  those poles carry and what happens when they fall to the ground. The current travels through the ground.

"We had an example of that at the bottom of Three Mile Hill on New Year’s Eve [last] where there was a flash-over of an insulator, and the voltage travelled down through the pole, through the ground, 470m along a fence and 12 sheep died."

He said in the past two years, there was a live line on the ground at Larnach Castle for two days, and live lines down in Harwood, Mosgiel and at Mt Grand Water Treatment plant on Townley Rd.

"The one on Townley Rd was down for seven hours. It turned the earth to glass. To this day, you can go up there and see it."

The cable had been daily leaking about two litres of oil, used to insulate the cable,  for the past six years.

There had been "token" efforts to find where the oil was going.

"We could absolutely end up like Auckland, without power for several weeks."

Another concern was the many pieces of equipment in the network that were "DNO — do not operate".

They included fuses and switches which meant the ability to switch a load from one line to another was significantly reduced, he said.

"It’s not just poles. It’s every aspect of the network that has degraded."

Aurora Energy chief executive Grady Cameron said the company was in contact with the Energy Safety Service yesterday, to share information about its pole maintenance and replacement programme.

The company was also investing $4million in its pole maintenance and replacement programme this year as part of the asset management plan in place.

"Aurora Energy takes the safety of people and communities extremely seriously and will also look into any concerns that are raised with our infrastructure."

He said all wooden and concrete poles had a "life expectancy" and there were national regulations that guided pole replacement and maintenance programmes.

The Energy Safety Service had confirmed it would carry out a compliance and safety audit to ensure Aurora Energy’s infrastructure met safety requirements.

"We welcome the review by the Energy Safety Service and are co-operating fully. Aurora Energy wants to reassure the public  the concerns about poor condition power poles are known to us and being addressed with urgency as part of our planned pole replacement programme.

"There is a temporary backlog of replacement work, but we have invested in, and significantly accelerated, our replacement programme in the past two years, and again this year to come into line with the industry regulations.

"Aurora Energy remains fully committed to completing the planned programmes to upgrade the network and is investing more than $400million to secure the future reliability of our network over the next 10 years."