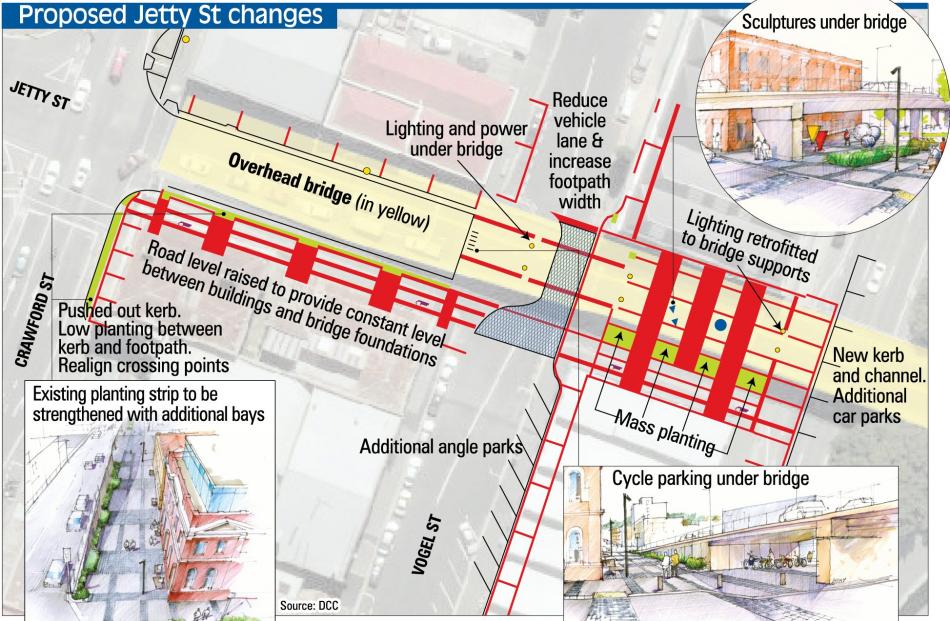 The Dunedin City Council is calling for feedback on its plan to close part of Jetty St in the warehouse precinct.

The council voted late last month to take the proposal to public consultation.

The project is part of ongoing work to revitalise the precinct, and would close two one-way sections of Jetty St below the Cumberland St overbridge.

Bollards would be installed to block vehicle access to the narrow one-way streets, which intersect with Vogel St between Cumberland and Crawford Sts.

The thorough nature of the proposal has been praised by the Automobile Association, but that organisation's response is not yet decided.

Council urban design team leader Glen Hazelton said people had until June 30 to provide feedback to the council on the proposal.

Dr Hazelton said the plan was developed in collaboration with local businesses, building owners, residents and the broader community.

It would involve upgrading public spaces and improving safety for pedestrians and cyclists in the area.

''Enhancing this area recognises its changing use and seeks to encourage further building reuse and restoration, and attract new businesses, residents and visitors.''

Service vehicle access to the three buildings in the section between Vogel and Crawford Sts would remain. The section of Vogel St between the two closures would remain open to traffic in both directions, although measures could be taken to slow vehicles because of a likely rise in pedestrian numbers.

AA Otago district spokesman Hudson Biggs said he appreciated the comprehensive information provided by the council. The AA would be making a submission on the issue but had not yet decided what its response would be.

• Improves opportunities for reuse of buildings in Jetty St.

• Will make it possible to create more interesting spaces in front of buildings, and reduce feeling of being hemmed in by road and traffic.

• Offers greater opportunities to improve pedestrian amenity of the warehouse precinct and make the area safer and more attractive.

• Reduces the risk of accidents from traffic merging on to Jetty St and turning on to Crawford St illegally.

• May reduce some pressure on the five-way intersection at Jetty-Princes-Stafford-Manse Sts by reducing vehicle numbers and queues caused by merging traffic.

• Reduces the number of vehicle access routes into and out of warehouse precinct.

• Reduces the number of routes for vehicles across Crawford St to Princes St from Cumberland St, requiring traffic to use either Queens Gardens-Rattray St or Jervois St.

• Will remove the six or seven informal unrestricted car parks under the Cumberland St overbridge, though offset by the creation of seven additional car parks on Cumberland St.