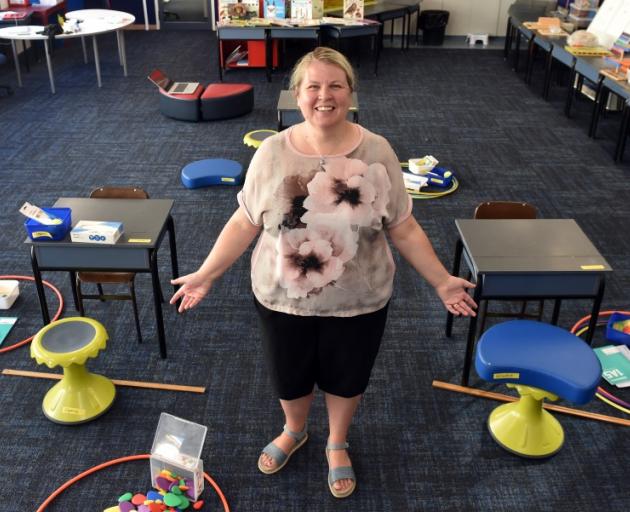 Tainui School co-deputy principal Erika Ward shows the new layout of a classroom at the school. PHOTO: PETER MCINTOSH
Fewer than 10% of pupils are expected to return to school today, an informal survey of Otago and Southland schools shows.

Otago Primary Principals’ Association president and Tainui School principal Shelley Wilde said some Otago primary schools would not have any pupils today, but most would have 6% to 7% of their pupils returning.

However, Otago Secondary Principals’ Association president Linda Miller said significantly fewer — between zero and 15 pupils up to year 10 — would be returning to secondary schools.

The numbers appear to be similar in Southland as New Zealand schools reopen under Level 3 restrictions.

Only about four of the 1077 pupils at Southland Girls’ High School were expected to return today, and Riverton Primary School principal Tim Page said just two of the 150 pupils at his school were returning.

At Shotover Country Primary School, in Queenstown, 30 pupils out of a normal 500 were expected, and a similar proportion was expected at Remarkables Primary School.

Shotover Country principal Ben Witheford said families had been “really good and understand what we are trying to do”.

Mrs Wilde said schools appeared to be well prepared for the “trickle back” to class under Alert Level 3.

She said her school had set up three separate classrooms (bubbles), each containing about six pupils, and none of the bubbles would cross paths.

The classes would have their own entry/exit at the school, their own toilets, their own places to eat lunch, and their own spaces in the playground to exercise.

“They won’t be able to mix. The way our school is laid out makes that possible.

“I think most schools will operate in a similar way.”

She said each bubble would always have two adults, so the pupils’ movements could be monitored, especially when going to the toilet and hand washing.

“There’s always going to be someone that’s making sure everyone stays where they’re supposed to.”

Each returning pupil would also be given their own box of regular classroom items like pens, pencils, rulers, colouring pencils, paper, glue, a skipping rope and a ball.

“They’ll be the only one touching and using them while they’re here.

“The staff in our three bubbles have also set up the furniture to meet the [1m distance] requirements.”

Mrs Wilde said each classroom would have its own health and safety equipment, which included buckets, disinfectant, spray and wipe, cloths and gloves; and signs had been erected to remind staff and pupils of health and safety protocols at the school.

Even staff were being carefully managed, Mrs Wilde said.

Only four staff would be allowed in the staffroom at a time, and the seating had been arranged so they were 2m apart.

“I’ve also made up separate packs of tea, coffee, sugar and biscuits for each staff member, so that when they come in for their break, they only take coffee or tea out of their own pack.”

She reminded parents and caregivers that schools were open only to children of essential workers and of those who could not work from home.

She also reminded them they must contact the school first so the school could make arrangements for the pupil’s return.

Online learning would remain available to all, she said.