Fire too fierce for firefighters 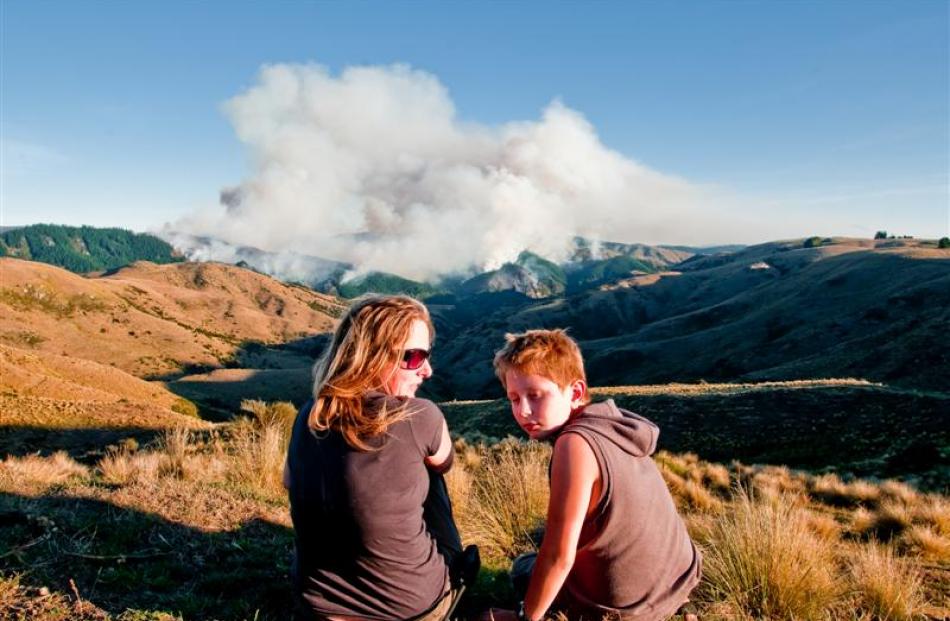 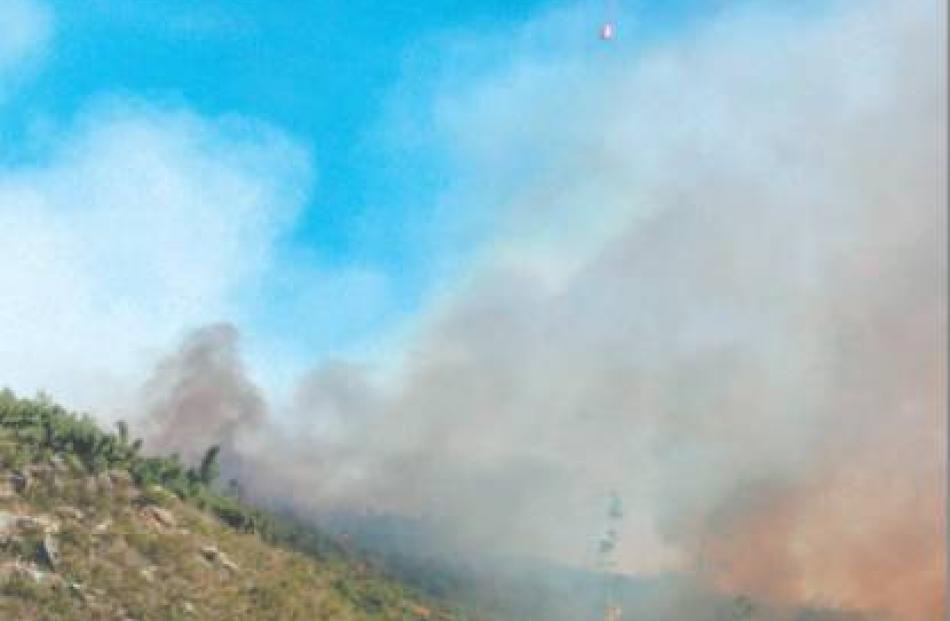 The fire captured by tourist Charlene Carpenter, a passenger on the Taieri Gorge train. 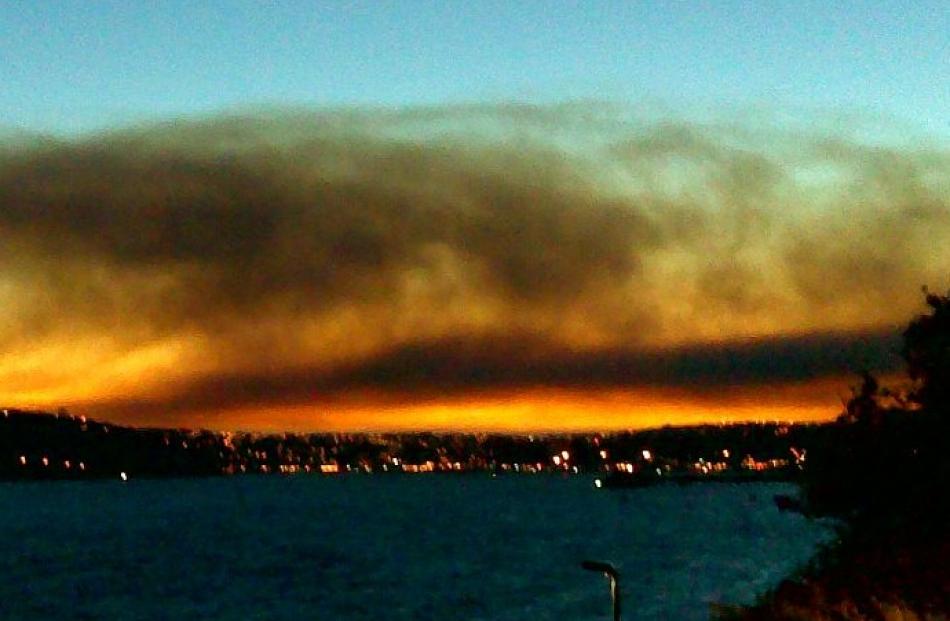 The combination of a setting sun and smoke from the fire provide a burst of colour. Reader photo by Gerard and Fiona Hyland.

A blaze near Mosgiel has now consumed 700ha of forest, and two more houses have been evacuated.

Dunedin residents awoke to a thick blanket of smoke this morning that covered the city until mid afternoon.

Civil Defence and Rural Fire manager Neil Brown said it was one of the largest fires of its type in the region.

The fire is being fanned by northwesterly and northeasterly winds that were predicted to continue for the next few days.

Ten helicopters and a fixed wing aircraft were being used to slow the spread of the fire until conditions improved enough to make serious headway into the fire.

More than half of the fire area was made up of pine trees and the remainder was even more flammable, dry, post-harvest debris that was providing ideal fuel for the fire to travel quickly.

Two more families left their homes voluntarily this afternoon, bringing the total number of evacuated homes to five. There were contingency plans in place should conditions change to affect another 10 to 20 homes potentially at threat in the area.

The fire could potentially destroy thousands more hectares of pine forest in the area and firefighters on the ground were not able to safely tackle the blaze in most areas.

There are several creeks and other natural barriers that should slow the spread of the fire but it was a matter of waiting for winds to die down and hopefully some rain, Mr Brown said.

"There is just so much fuel there and we are just trying to hold it as tight as we can.

"The potential to burn is quite huge," Mr Brown said.


Earlier report: Ten helicopters with monsoon buckets are continuing to battle a large blaze near Mosgiel, which has destroyed 400ha of forest, and threatens high tension power lines.

The helicopters are fighting the fire on three fronts but the headfire is too "thick too fly'' over, civil defence and rural fires manager Neil Brown, of Dunedin, said this morning.

"So that's going to have to be let run for the moment," he told a press conference this morning.

He said about half the burnt forest was growing trees and half was cut-over.

"The cut-over is proving the most dangerous," Mr Brown said.

• Send us your photos

More than 50 firefighters, including crew from Department of Conservation and Clutha District, were at the scene although it was too dangerous for groundcrew to fight the fire.

Three homes had been evacuated, and contingency planning was underway, he said.

He confirmed high tension powerlines were in the area and Transpower had been informed.

There was a possibility fixed wing aircraft, loaded with a chemical retardant would fly over the area today, he said.

Weather conditions were "not favourable'', with hot and windy conditions, he said.

However 10mm of rain was forecast for this evening.

The Pineapple Track was closed to trampers.

The fire was not threatening the few houses in the area at the moment, but fire crews were keeping an eye out for wind changes.

Smoke billowing from the fire could be seen from Dunedin, about 30km away.

Dunedin residents woke to the smell of smoke and the sight of smoky haze over the city as firefighters were today continuing to fight a blaze ripping through a forestry plantation inland from Mosgiel. 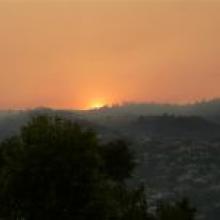 The sun peeks through the smoke over Signal Hill this morning.
Some residents were evacuated last night as flames in the Wenita Forest neared houses, threatened powerlines and held up the Tairei Gorge train trip.

More than a dozen helicopters with monsoon buckets were used to fight the blaze as it continued to burn near Mosgiel through the night.

The fire, which cast a pall of smoke over parts of Dunedin and the Taieri Plain late yesterday, halted the Taieri Gorge train for more than an hour as flames jumped over the tracks.

The fire on the Mount Allan forestry block began at 3.30pm, and was believed to have been started by logging equipment working in the area, Wenita Forest Products Ltd chief executive Dave Cormack said.

The fire started in a 20ha area that had been logged, but flames had jumped into nearby pine forests affecting a further 20ha.

Forestry contractors were immediately withdrawn from the area while helicopters with monsoon buckets, taking water from the Taieri River, fought the blaze. 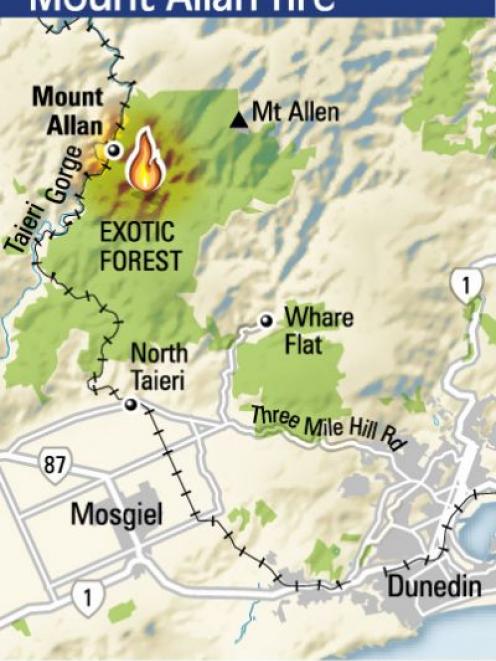 Principal Rural Fire Officer Graeme Still said a dozen helicopters worked until dark as it was too dangerous for ground crews to work in the steep terrain.

Three properties had been evacuated and fire crews were working to save them.

Asked if high tension powerlines and Dunedin City Council water pipelines were threatened, Mr Still said "not at this stage".

Fire operations had broken the area into two sectors - north and south.

By early evening, they had the northern sector under control but the southern section was still a problem last night.

In the southern sector, the fire was "spotting", or jumping, up to 300m at a time due to the slope and winds, he said.

The wind was blowing up to 27kmh in the afternoon, but had dropped in the evening.

Fire crews would be at the site for a "couple of weeks" as they worked to put the fire out.

"It's rough country out here."

Fire crews were on standby to head to the site at 7am today to tackle the hotspots.

Smoke covered the Taieri Plain, causing flights to Dunedin International Airport to be rerouted and spectators to drive to the start of the Pineapple Track for a closer glimpse.

Mount Allan Rd from the Taieri Plain was closed yesterday.

Fire Southern Communications fielded more than 40 111 calls from people around the city.

A locomotive carrying several hundred passengers was ordered to stop as flames passed over the train tracks ahead.

Locomotive engineer Jarrod Olliver said he had contacted his operations manager after noticing "fire and smoke in the distance" on the excursion train's journey to Pukerangi.

"It was miles away."

However, on the journey back to Dunedin the engineers were told to stop the train immediately as fire was jumping over the tracks just 2km away.

The locomotive engineer of eight years said he had never encountered a journey quite like it.

"I am not a hero. I just braked really hard."

Passengers, who were told by staff to keep their windows and doors shut as the locomotive and carriages were brought to a standstill, watched helicopter after helicopter dump water on the nearby flames.

Passenger Al Peladeau, of Rhode Island in the United States, said it was stifling hot inside the carriages, and at one point the glass was scorching hot.

"You could just feel the heat off it."

His daughter, Lori Parker, of Nelson, said, "We didn't expect to see what we saw."

"Major kudos to the helicopter pilots.

They were incredible to watch."

The mood on board the carriages was good, with staff working hard, despite some concerns over people missing possible connections during their one and a-half hour delay.

Carol Blecich, of Sydney, said fire came within several metres of the carriages, but passengers felt reassured by staff that they were in no danger.

"You could just feel the heat come though the window."

Mr Olliver said the flames had jumped over the tracks and he was confident the heat would pose no problem for the diesel locomotive.

"When we got the call to go through, there were some flames by the track, but it went OK."

As the train pulled into Dunedin at 7.35pm - an hour later than usual - the hundreds of passengers on board erupted into spontaneous applause.

A neighbouring landowner and former forestry worker, Ariki Mains, said temperatures in the area had been sweltering in recent weeks and ground conditions were tinder dry.

"When you have metal cables, pulleys and chainsaws working in tinder dry conditions, sparks can be explosive.

"This was a fire waiting to happen.

"Maybe because of the temperatures here, they should have stopped work."

Andrew Lord, piloting a two-seater Cessna, and passenger Daniel Broad, approaching Dunedin airport from Nelson about 5.30pm, said the smoke was extensive and visibility was so poor they were forced to fly out towards the coast and around the smoke to land.

"We could see the smoke from Oamaru and, as we got closer to Dunedin, saw it was blown across the Taieri Plain and halfway across to the airport," Mr Broad said.

"All we could see was a massive amount of smoke but no fire.

"We flew towards the coast, around the smoke, to land the plane."

The fire risk in the area was medium to high.