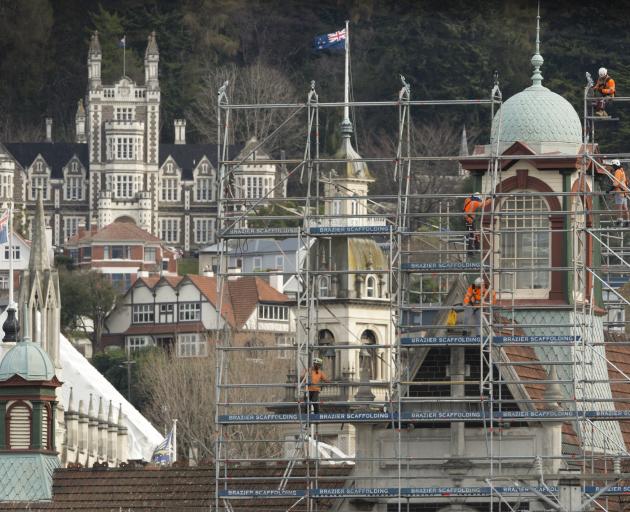 More than 50 tonnes of steel bars, plus brackets and roof supports, will be clad in waterproof material to protect the historic Dunedin Railway Station while its exterior undergoes renovations. PHOTO: GERARD O’BRIEN
Traditionally, being behind bars means a history of misdeeds.

But in the historic Dunedin Railway Station’s case, the 53 tonnes of steel bars now surrounding it are not to keep the public safe — they are there to keep the building safe.

It was one of the bigger projects they had worked on recently, and extra supplies had to be brought in from Brazier branches across Otago and Southland, he said.

Once erected, it would be covered with waterproof material to protect the building from the elements while a million-dollar upgrade is carried out on the exterior of the building.

The railway station is one of the most photographed buildings in New Zealand, and to keep it aesthetically appealing during the renovations, the scaffolding on the front of the building would be covered with an image of the railway station.

It would be there for the next 12 months, he said.

The project includes repairs to the roof, walls, ornate fixtures and stonework.

While the 114-year-old railway station, listed as a Category 1 Historic Place, had been maintained over the years, the exterior needed significant work due to its age and associated deterioration.

The overall project is due to be completed in 2023.