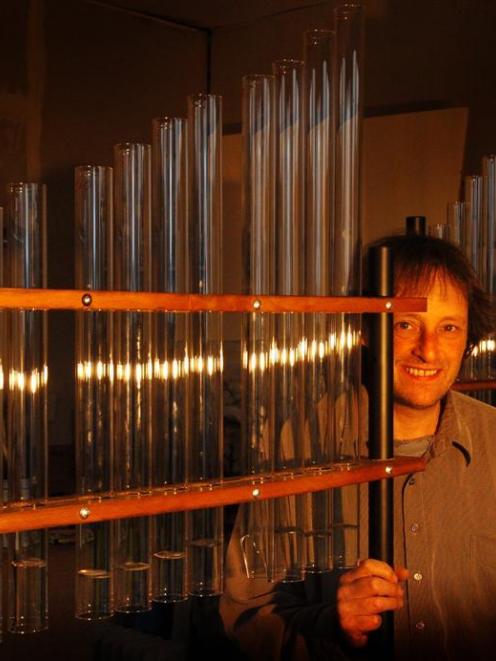 The Taieri Mouth "sound artist" and musician has spent the past six weeks building his own fire organ, which uses the laws of thermoacoustics to create sound.

The organ is made of 25 toughened glass tubes imported from Germany and sound is made by heating metal gauze inside the tubes with a bunsen burner.

It is the only one of its kind in New Zealand.

"It almost sounds like a trombone, or a train horn - but it can also sound like recordings of whales."

Mr Galbraith said he was inspired to build the instrument after reading a book by Sir William Bragg called The World of Sound.

It was filled with science experiments, including one by Dutch physicist Petrus Rijke, who invented the instrument in 1849.

The fire organ is not the only experimental instrument Mr Galbraith has brought to Dunedin. In 1999, he stretched piano wire across rooms in a building and "played the building".

"You put violin rosin on your fingers and stroke the strings - the whole building sings."

Mr Galbraith said he would give his first public performance on the fire organ in Auckland next Tuesday, as part of the 2009 Arts Foundation of New Zealand Laureate Awards ceremony.

Eventually, he hoped to put electric heating elements inside each tube, which would be safer than a naked flame, and allow him to play the instrument with more accuracy.