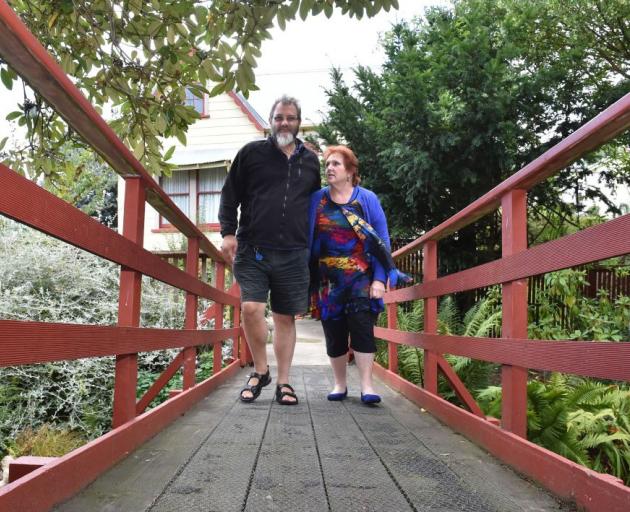 Bruce and Joy Hall’s plans are on hold after last year’s flood, which damaged their bridge, land and garage, was followed by an insurance nightmare. Photo by Gregor Richardson
Frustrated homeowners in Dunedin are still fighting to pick up the pieces, nine months after last year's $30m flood. Chris Morris talks to the forgotten victims about broken houses and shattered dreams.   In his darkest hours, Bruce Hall's thoughts turn to bankruptcy.

Cutting his losses. Walking away. And leaving behind a $50,000 bill hanging over the place he has called home in Dunedin for the past decade.

But it is one that sometimes seems to offer the only way out of an insurance ‘‘nightmare'' that has dragged on for Mr Hall since the middle of last year.

‘‘In the worst moments it really does feel like that's an option,'' he said. ‘‘A decent night's sleep, if you can get one, and a bit of reflection, and you dig your toes in again and start beating your head against a brick wall.''

The nightmare started for Mr Hall and his wife, Joy, when the first drops of a 175mm downpour began to fall on their Dunedin home, at 128 Glen Rd, on June 2 last year.

Within 24 hours, the deluge had overwhelmed parts of the city's infrastructure and flooded streets, homes and businesses, with South Dunedin the worst hit.

In the weeks that followed, compensation claims began to pour in almost as fast as the rain fell, eventually resulting in 2405 payouts by insurance companies and another 93 by the Earthquake Commission.

The payouts pumped nearly $30 million into rebuilding waterlogged Dunedin properties and lives, but the figure does not capture the fate, or the frustration, of those still out of pocket, nine months after the event.

For Mr Hall, memories of the flood remained fresh, as did the signs of the water's destructive power, after last June's downpour turned Mr Hall's street into a fast-flowing river.

That river had many courses, but one of them led down off Glen Rd and straight into Mr Hall's garage, which was so badly damaged it later had to be demolished.

A normally quiet stream trickling through the front of Mr Hall's property was also transformed into a torrent that stripped away Mr Hall's land - up to 2m in places - and ripped the end off a retaining wall, causing the rest to slump.

The water even sucked in a large plum tree, roots and all, which ended up further downstream.

But more costly still was the damage delivered to an old wooden footbridge crossing the stream, which provided the only link from the street to Mr Hall's home.

The force of the water undermined abutments at both ends of the bridge, leaving the structure teetering, propped up by emergency repairs and in dire need of replacement.

The bridge was essential to Mr Hall and his wife, whose recent back surgery has robbed her of her mobility - if it collapsed, they would be unable to reach their own home.

‘‘Literally, we would have to abandon our [property]. We have no option. The is no alternative access.''

As the water receded, the initial response by Mr Hall's insurance company, State, and the Earthquake Commission (EQC) was good, he said.

Loss adjusters were on the scene in the days after the flood, and State agreed to pay out $15,000 for the damaged garage.

But that was when the bad news started rolling in, Mr Hall said.

A geotechnical engineer, in a report for EQC, suggested a figure of $66,000 to compensate the couple for their remaining damage, while reassuring them privately that ‘‘EQC should be covering the lot'', Mr Hall said.

But EQC disagreed, offering the couple a much lower payment of just $13,800.

The lower figure was based on a sum per square metre of land lost, including the bridge, which was treated as land because it was the couple's only access to their house, Mr Hall said.

The result was a payout of ‘‘hundreds of dollars per square metre'' towards the estimated $10,000 cost of replacing the bridge, he said.

It also meant the estimated $20,000 cost of fixing their damaged retaining wall - needed before their garage could be rebuilt - was not covered, Mr Hall said.

Instead, the couple were told they could expect their EQC payment to be topped up by their insurance company, Mr Hall said.

So the couple went back to State, only to discover further complications.

The first was the bridge itself, which, having been built about 1940, did not have an existing resource consent, Mr Hall said.

Dunedin City Council records suggested none was needed, as both the bridge, and the damaged retaining wall, had been built by council contractors in response to serious flooding in the area in 1939.

That pre-dated the introduction of resource consents in Dunedin, which ‘‘didn't exist in 1940'', making the bridge ‘‘lawfully established'', council staff confirmed this week.

But, without a consent, State declined to cover the cost of replacing the bridge - an outcome Mr Hall said was ‘‘wrong''.

The second complication was the damaged retaining wall, which State also declined to cover after arguing it had not been declared when the couple's insurance arrangements were updated in 2014.

The switch to a sum-insured approach following the Canterbury earthquakes meant homeowners were required to nominate a figure representing the full replacement cost of reinstating their properties.

Mr Hall said he spent an hour in State's Dunedin office, updating his policy ‘‘face-to-face'' with the company's staff, and ‘‘at no point did retaining walls come up in the conversation''.

State customer claims general manager Ruth Colenso, in a statement to the ODT, accepted there was no record of the wall having being discussed during the meeting.

But she insisted the new approach had been well signalled, in a national advertising campaign and in documents sent directly to Mr Hall, which was ‘‘sufficient''.

Those documents listed the need to list bridges and retaining walls, among other items, she said.

Mr Hall had also been asked for more information about the bridge before it would be insured, and had not done so, so it was not covered, she said.

The company could not anticipate the special features of every home, and relied on homeowners to do so, she said.

EQC customer and claims general manager Trish Keith said Mr Hall had been told the EQC payment would be based either on the valuation of the land and assets, or the cost of remediation - whichever was less.

The figure arrived at in Mr Hall's case reflected the value of his damaged land, the risk of further damage, and the indemnity value of the bridge and retaining wall.

The indemnity value was based on the cost of replacing, repairing or rebuilding an asset, like a retaining wall, to a condition that was ‘‘substantially equal'', based on its age, condition and remaining useful life, she said.

Mr Hall said the outcome had left him facing a $50,000 shortfall, although he conceded he had not expected to recoup all of his losses.

Instead, his house was also ‘‘effectively valueless'' until the bridge was replaced, meaning the couple couldn't even sell up and leave, he said.

‘‘No-one will touch it with that sort of access problem.''

The shortfall had even prompted Mr Hall - a DCC employee - to apply for a grant from the council's Mayoral Relief Fund, only to be knocked back again.

He was now consulting a lawyer to see if the payment from EQC could be challenged, but that meant even the initial $13,800 payment remained ring-fenced and unable to be spent until a resolution was reached.

It also meant Mr Hall (47) and wife Joy (57), who could not work because of her mobility problems, faced the prospect of going back to their bank for a loan.

But if they did, their plans to sell up and build their perfect retirement home were likely to be ‘‘gone'', he said.

‘‘We simply don't have the sort of income to cope with that size of bill now, and get over it in time to build a house and pay it off before we retire.''It was a predicament that has left Mr Hall frustrated, to say the least: ‘‘It really pisses me off.''

‘‘I know it's a natural disaster . . . but to kind of have your entire life pulled out from underneath you, and then have everyone go ‘well, it's your problem, you deal with it' . . . I think the insurance companies have picked up some very bad habits from Christchurch.''

The entire experience has left him stressed and frustrated after a lifetime paying his dues, and with a warning for others.

‘‘Just because you pay insurance, doesn't mean you're covered. You have to be very careful and read the fine print.''

But the couple were not alone in their plight, according to Dunedin South Labour MP Clare Curran.

Her office had dealt with more than 40 residents facing insurance problems since the flood, ranging from those without any insurance to those grappling with claims that had stalled.

In some cases, homeowners had found themselves ‘‘going round in circles'' with assessors, EQC and other agencies, and the insurance industry needed to ‘‘up its game'', she said.

‘‘For people already stressed and frustrated by the impact of flooding on their properties or businesses, this is not good enough."

But both the EQC and Insurance Council of New Zealand have defended their performance in the flood's aftermath.

EQC figures showed it had received 169 claims following Dunedin's flood, and paid out on 93 claims, in part or full, totalling about $1.7 million, EQC head of customer and claims head Trish Keith said.

Another 65 claims - or 38% of those received - had been declined, while 11 were still to be resolved, she said.

The amount paid out was determined by the provisions of the Earthquake Commission Act, but the number of claims declined was ‘‘in line'' with other flooding events, Ms Keith said.

EQC had been in regular contact with those who lodged claims, including face-to-face meetings and assessments, and continued to work closely with Dunedin customers ‘‘to ensure they receive their full entitlement'', she said.

‘‘We are satisfied that all land claims are being settled as efficiently as possible.''

Insurance Council of New Zealand figures showed insurance companies had together paid out $28.19 million on 2405 claims following the June flood.

ICNZ chief executive Tim Grafton said ‘‘very, very few'' had been declined, and he was ‘‘not aware of any widespread delays in claims''.

A ICNZ spokeswoman said the council did not routinely collect statistics on the numbers of claims declined by individual companies.

State would only say it had settled 75% of claims and declined ‘‘less than 1%'', while those not yet finalised were ‘‘well underway''.

‘‘We are happy with our response to this significant weather event, though we acknowledge that there is always room to improve.''

Just one claim had been declined, and while another 34 were yet to be settled, most of those were ‘‘nearing completion'', he said.