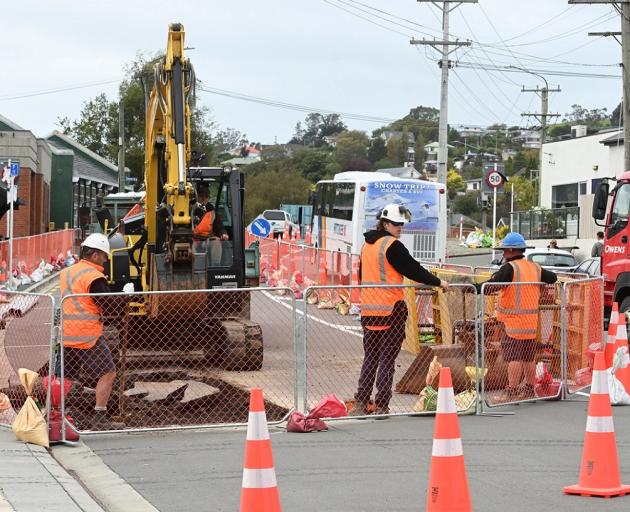 PHOTO: LINDA ROBERTSON
Roadworks in the main street of Green Island are funnelling heavy traffic down narrow suburban streets, in the view of one resident.

Kathy Fuller, of Muir St, said roadworks in Main South Rd had increased traffic past her house by "four or five times" over what she would normally see.

That was exacerbated by a lack of detour signs to tell motorists how best to navigate the area.

Edinburgh St, Rennie St and other streets in the area were all now seeing commercial and heavy traffic, she said.

She posted feedback about the traffic on the Dunedin City Council Facebook page, but as of late last week had not seen any detour signs being installed, either in the suburban streets or from the motorway.

Main South Rd is being dug up for the replacement of pipes, work that will be followed by the construction of new road features including a roundabout.

While it had initially indicated streets to the south of the works such as Rennie St might be suitable potential detours for light traffic, they had not been signposted as such because they were not suitable for larger vehicles.

"We are aware the drivers of some larger vehicles have been continuing to use them, so we now encourage all motorists to use the motorway or Carnforth St (through Abbotsford) as the main detours."

Signs were in place to indicate those options, she said.