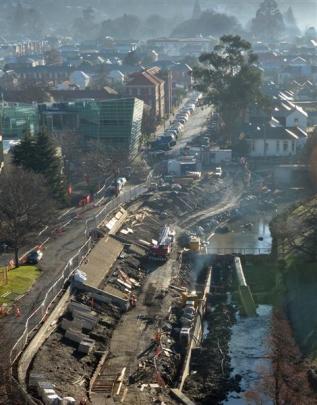 Flood protection work continues yesterday on the Water of Leith, in front of the University of Otago's registry building, in Dunedin. Photo by Peter McIntosh.

Wet weather and underground surprises have slowed work on the multimillion-dollar makeover of the stretch of the Water of Leith in front of the University of Otago's registry building.

However, he could not confirm if the work would be finished by an August deadline.

''It's looking good, but clearly we'd like it finished sooner than later.''

About $5.4 million is being spent on lowering the concrete wall on the west side of

the Leith in front of the University of Otago's Registry Building and extending the span of the St David St footbridge to allow for greater flood flows and better access to the river.

Dr Palmer said the Otago Regional Council and its contractors had been beset by problems beyond their control.

A run of wet weather had meant the river levels were too high to undertake in-stream works and then it was discovered the footings of the St David St bridge were not as substantial as first thought, he said.

''We are trying to resolve these problems quickly and cost-effectively.''

The council had hoped to finish the works before winter but were delayed by a University of Otago request for a temporary bridge across the Leith while the St David St bridge was out of action.

The council was well advanced in its planning for the next section of works, from the footbridge up past Montgomery Ave.

It was on track to put the work out for tender and for preliminary work to begin in November.

The Dunedin City Council and the university were working through the timing issues, he said.

Next, the ORC would look at what needed to be done to ease flooding pressure on the corner under the university's information technology services building, which would link work done downstream of the Leith St footbridge with the registry section.