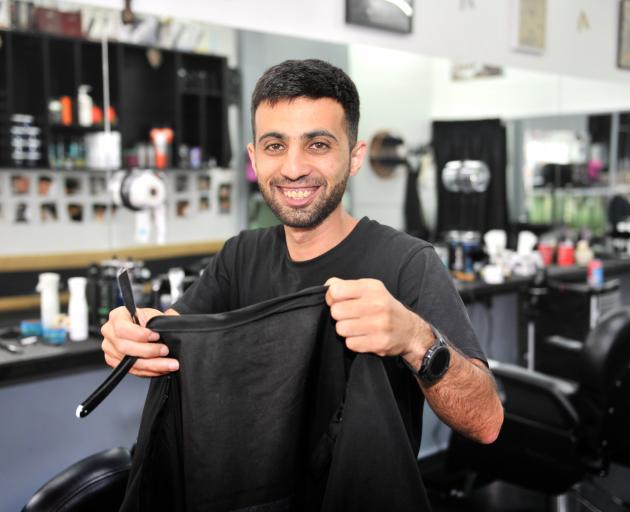 After escaping war and persecution in his home country, he is about to open his second Dunedin barbershop, staffed by other former refugees.

Mr Aldeen came to Dunedin in December 2016 with his wife and first child after fleeing Syria for Lebanon.

On arrival, he found language barriers made finding a new job difficult.

He started by working in retail, but the minimum wage was not enough to care for his family in Dunedin and abroad.

''I have to send money back to my family in Lebanon. For rent, food. It's not enough.''

Mr Aldeen worked in his family barbershop in the town of Darra in southwest Syria when he was young, but he turned away from his father's career and became an upholsterer.

After some time in Dunedin he decided to return to the trade.

Eventually the owner moved on and nine months ago Mr Aldeen bought the business and renamed it Culture Cuts.

At first he struggled to make ends meet.

Eventually, he built a client base and was able to hire two more barbers. Another will start soon.

All are either Syrian or Palestinian former refugees.

When asked if it felt good to employ those in similar situations, he said ''yes, because I like to help people''.

It also helped they could all converse in Arabic.

In a month he will open a second shop in Factory Rd, Mosgiel.

He was able to expand the business because he ''saved money'' and was given two months' free rent at the Mosgiel location to set up.

His point of difference was using a straight razor as well as scissors and electric clippers.