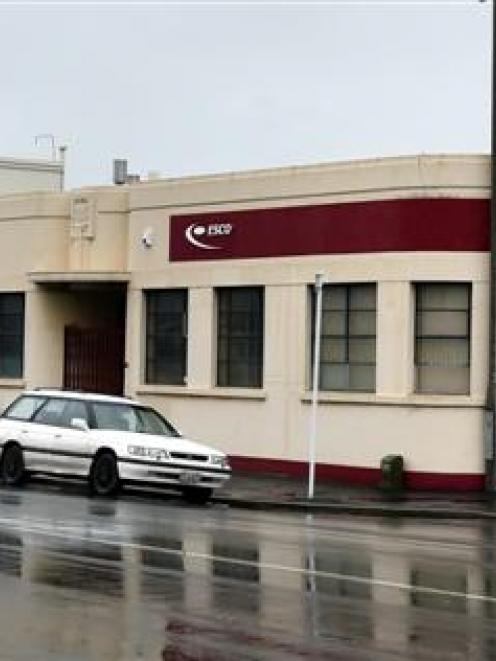 The Esco building in Thomas Burns St. Photo by Peter McIntosh.
Australia's mining downturn is set to deliver a ''real blow'' to Dunedin's economy with the closure of the Esco foundry and the loss of dozens of jobs.

Staff at Esco Dunedin were told yesterday the foundry would close by the end of the year, with the loss of 34 jobs.

Esco products division president Jeff Kershaw, of Portland, in the United States, said in a statement the decision reflected a downturn in Australia's mining industry that showed no sign of letting up.

Mayor Dave Cull said the announcement was ''a real blow'' for the city.

''Our engineering companies are, from my understanding, of a very high quality and they have some highly skilled jobs.

''Any job is a loss, but highly skilled ones are worse, so it is a blow.''

He had been given no indication the closure was imminent, but was not sure the council was in any position to help anyway.

''I would have thought that if it were something the city had an influence over, they would have come to the city and said something about it.''

The only positive could be the struggles some other engineering firms in Dunedin faced in trying to recruit skilled staff for certain positions, he said.

''I just hope that those other engineering firms can soak up those 34 [job losses],'' he said.

Otago Chamber of Commerce chief executive Dougal McGowan declined to comment, saying he was not aware of the details of the closure yesterday.

Mr Kershaw said the company was aware of the impact the ''very difficult'' decision to close would have on the community, as well as the ''disappointment'' it would cause.

The decades old foundry was previously owned by Farra Engineering, which sold it to AustCast in mid 2007.

The foundry was then run by AustCast's Dunedin subsidiary, Newlcast, until both were bought in 2010 by Esco, which supplies truck bodies and other parts for the mining industry.

Mr Kershaw said the decision to buy came at a time when mining markets were ''quite different'' and local capacity was needed to meet customer demand in Australia.

''Now we are faced with a new market reality in the midst of a mining downturn.''

Esco's international network of foundries was operating ''at less than optimal levels'' and excess capacity issues needed to be addressed, he said.

Dunedin's foundry would have needed ''significant'' capital investment to expand its limited floor space and accommodate other operations. The high cost of manufacturing in the city meant it was ''just not practical'' to do so, Mr Kershaw said.

''It is truly a shame, considering the positive attitude and work ethic of the Dunedin workforce, that this operation has to be closed.''

Esco Dunedin was among a group of neighbouring businesses objecting to Russell Lund's plans to redevelop the 142 year old Loan and Mercantile building, citing reverse sensitivity concerns, including over noise.

The outcome of Environment Court mediation talks was yet to be revealed, but Mr Kershaw said the issue played no part in the company's decision.