A fresh look at Dunedin's recycling 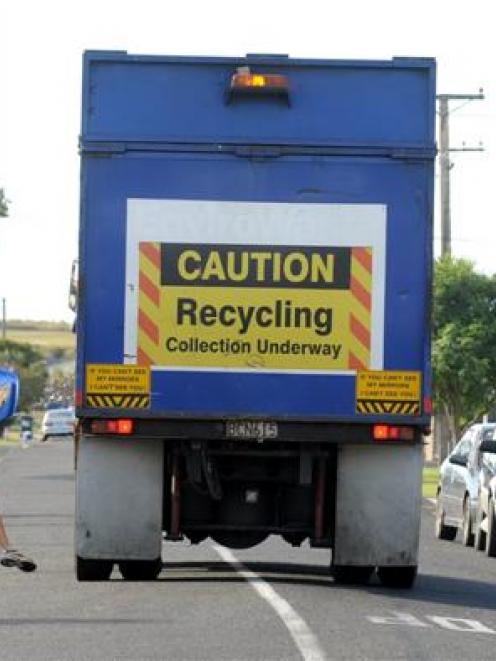 Contractors rush to clear the streets of South Dunedin of recycling. From October next year, they could have new wheelie bins to grapple with. Photo by Stephen Jaquiery.
Dunedin residents have until tomorrow to comment on the city's new waste and recycling system. But, as the deadline approaches, some important new ideas are already beginning to take shape, as Chris Morris reports.

A small fleet of trucks has become a familiar sight on Dunedin's streets since the Dunedin City Council's blue bin recycling system was introduced in 2003.

The trucks roar and clank their way around the city's steep and winding streets, scooping up a small mountain of glass bottles and jars, piles of paper and plastic, cardboard, aluminium and steel and taking it away for recycling.

However, since December, instead of being trucked away and melted down for reuse, the steady stream of used glass has been piling up at the city's Green Island landfill - dumped, or stockpiled - to await its fate.

Since the middle of this year, some of the glass has been put to use, being crushed for use as a filter around gas recovery bores at the landfill.

Council staff admit it is far from ideal, a short-term solution they call "being landfilled with purpose".

Why? Because nobody wants to buy glass mixed with paper, cardboard and bits of tin.

And, according to council waste strategy officer Catherine Broad, of Dunedin, that was one of the flaws with the city's single-bin system, which sees most recyclables - including glass - placed in the same blue container.

All that may be set to change, however, as council staff eye amendments to the recycling system that could give the city a competitive edge over other centres.

The Dunedin City Council is consulting the public on its preferred option for a proposed new kerbside rubbish and recycling collection system.

If adopted, Option C would result in the retention of black bags for rubbish and blue bins for glass recycling only.

A new 140-litre wheelie bin, or similar, would be introduced for other recyclable materials.

Rubbish would continue to be collected weekly, on a user-pays basis, while the blue bins and wheelie bins would be collected fortnightly.

However, Ms Broad told the Otago Daily Times she was excited about the potential recycling boom that could result from being able to offer a clean supply of separated glass to buyers.

Buyers like Auckland-based O-I New Zealand - New Zealand's only commercial glass bottle and jar manufacturer - were "screaming out" for a clean supply of recycled glass, she said.

At present, the flow of old tins, plastic milk bottles and glass jars from Dunedin homes all went into the same blue recycling bin, which was collected by Waste Management contractors and taken to the company's semi-automated Wickliffe St sorting plant.

Once there, however, it was difficult to completely separate the mixed materials, Ms Broad said.

That meant bits of cardboard in the glass, and bits of glass in the cardboard.

The problem was magnified by a collapse late last year in demand for recycled glass, which meant buyers could pick and choose only the best quality, and cleanest, glass supply.

"When markets got tight, quality became a very important aspect of your recyclables market," she said.

Previously, Fulton Hogan had taken the glass, which was crushed and used for aggregate, but the programme was eventually stopped after running at a "mammoth loss".

If adopted, Dunedin's new collection system was expected to be running by October next year.

Ms Broad said separated glass would give the city a competitive edge over many other New Zealand cities and towns, including Auckland and smaller centres like Timaru, which still used a co-mingled recycling system.

"All through last year a lot of systems were changing.

It [co-mingled] was treated as the industry standard.

"O-I [New Zealand] just didn't have a clean feed. Suddenly, they haven't got enough glass for their furnaces. They are desperate for a clean feed of glass. It's a great opportunity for Dunedin.

"It does open up some opportunities to get that tonnage up and get it recycled."

In Auckland earlier this month, the city's co-mingled recycling system had resulted in a "mammoth" mountain of 13,000 tonnes of crushed glass being stockpiled awaiting processing at an Onehunga plant.

In the Queenstown Lakes District, Queenstown - which operated a co-mingled system - was having a tougher time selling its glass than Wanaka, which had a separated collection service, Ms Broad said.

Dunedin also had a mountain of glass to move.

Tenders to be let early next year, before the introduction of Dunedin's new scheme, would include the requirement to build a new recycling plant, which would help in the processing of clean streams of glass, paper, cardboard and other materials.

Another important change on the horizon was the arrival of a new, open-book style of auditing to accurately track the city's recycled plastics and other materials, Ms Broad said.

The initiative followed claims last year that New Zealand recycled plastics were being shipped directly to buyers in China, where they were sorted and processed by hand - a practice that raised health concerns.

Plastics were considered a hazardous waste, and those from New Zealand were supposed to be shipped to a processing plant in Hong Kong, where they were cleaned and heat-moulded, before being shipped to buyers elsewhere in China, she said.

New Zealand was a signatory to the Basel Convention, an international treaty governing the handling of hazardous waste including recycling, she said.

However, verification that the rules were being complied with was hard to get.

It, in turn, on-sold the plastics to Pacific Roy, a Christchurch-based broker company, and they ultimately ended up in the hands of buyers in China.

However, Ms Broad said she had no information on the buyer, or their location, in China, and had to make do with "assurances".

"It's not an open book, but I'm told it's all being recycled properly."

Waste management branch manager Kerry Roberts, of Dunedin, told the ODT much of the plastic was shipped to Malaysia and Hong Kong, where it was sorted and reprocessed before being on-sold.

He was confident the plastics were going to appropriate processing plants, but did not receive reports back from Pacific Roy - or the end-buyers - on how the material was handled.

However, Mr Roberts questioned the need for an open-book auditing system, saying it would be an extra cost to ratepayers.

"If we are asked to do it we will do it, but at the end of the day I don't believe there's a benefit to the ratepayer," she said.

"At the end of the day I think that's what you need - a benefit to the ratepayer."

However, as his company planned to tender for the new collection service, Mr Roberts said the council's decision would be "fine with me".

"Should the council decide they want this auditing system, we would have no issue in providing it for them."

Transpacific Industries Group Ltd - which owns Waste Management - did not respond to an ODT request for comment, and inquiries with Pacific Roy drew only a limited response.

Pacific Roy managing director Yu Ou Yang, of Christchurch, said in an emailed statement his company exported plastics to a factory in China consuming 20 tonnes each day, as well as to Hong Kong.

The plastic was processed for reuse as plastic sheets and fibre, he said.

However, Mr Ou Yang would not provide the names of his buyers in China or the guarantees he sought to ensure recycled plastic was being handled properly during the process.

Ms Broad said seeking such assurances was now "crucially important", and would be written into future contracts to be tendered.

"The community want to know. We are asking them to do something [recycle] . . . and we not only want to give them the reasons why, but tell them where this material is going and how it's being processed."

After submissions closed tomorrow, a hearing would be held on October 5 and a final decision made by November 2, Ms Broad said.

The imminent arrival of a new system - whatever its final shape - was "very exciting".

"I think what we are doing with the glass [moving to separation] is a success story," she said.

"It's a huge step in the right direction for Dunedin."