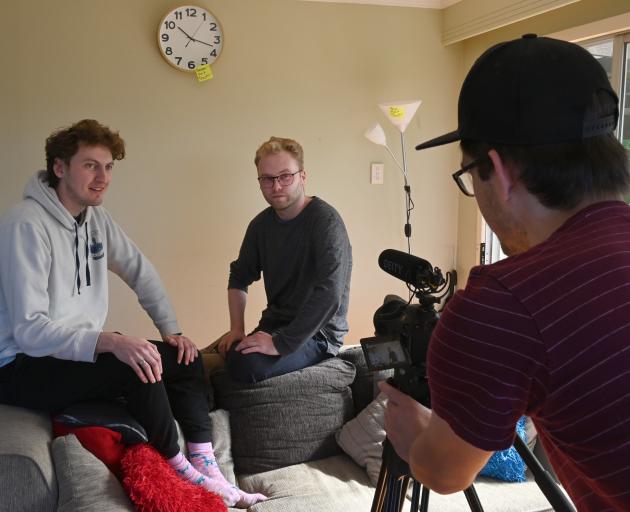 Friends (from left) Toby Stoddart and Tenson Dalby are filmed by Jamie Farmer for their entry in a national 48-hour film-making contest. PHOTOS: LINDA ROBERTSON
Have those car keys really become invisible?

Missing car keys have caused many people a great deal of grief over the years.

However, several Dunedin friends had to face that invisibility question with extra intensity during the latest national Vista Foundation 48Hours film-making contest at the weekend.

Adding to the urgency of the script for the five-minute film was the idea that one of the characters was a busy businessman, needing to rush away to an important meeting but unable to find his keys.

And the businessman, played by Wyatt Ryder (22), was starting to suspect that a flatmate, who had the quirky power of making objects become invisible, may have done just that with the keys.

The four friends, project co-ordinator Jamie Farmer (26), now of Christchurch, Toby Stoddart (23), Mr Ryder, and Tenson Dalby (23), the man with the invisibility powers, were well suited to working on the project together.

They are all University of Otago BA film, media and communication graduates, and over the years have eaten plenty of pizza and watched plenty of bad movies together, they joked.

They started grappling with their film project at 7pm on Friday and had until 7pm yesterday to upload their film’s digital file to the national organisers, via the internet.

And on Saturday, they were already busily at work, doing their main filming before adding any special effects and doing any re-shoots, and doing the editing.

Several of the film-makers had to act in the nearly zero-budget film, but, making that easier, they decided to "play" themselves, using their own names.

"I wish we had more than 48 hours," Mr Ryder, who is also an Otago Daily Times reporter, said.

Having had the same Otago training in film-making, "it’s nice because we all know what we’re doing for once!" he joked.

Competition organisers required the film-makers to include at least one invisible object — hence, in this mini-movie, the apparently invisible keys.

However, this group of film-makers took the invisibility concept a lot further.

Their film script, which they wrote in a few hours on Friday night, called for Mr Dalby to have some extra powers, namely the ability to make everyday objects, including car keys, invisible.

Some tortured scriptwriters and other film-makers have at times stayed up all night to meet tight production deadlines.

However, these friends had eight hours’ sleep both nights, and on Saturday said the overall mood was "relaxed".

Final editing, special effects and any extra shooting was completed yesterday for this project, which organisers said was one of 23 being produced for the competition, in Otago-Southland.