Frustration as TVs dumped, not recycled 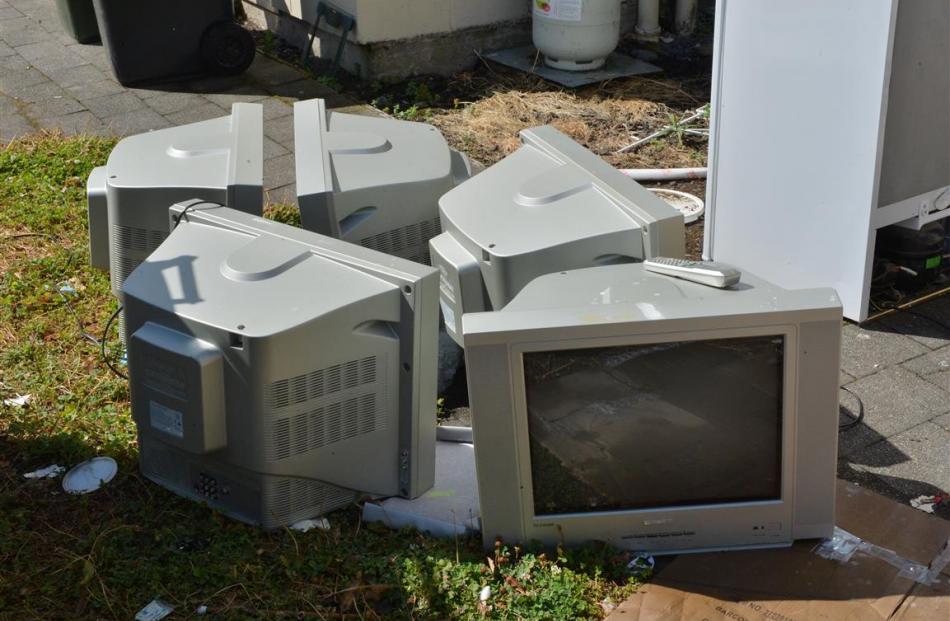 Television sets outside a student flat in North Dunedin. Photo by Gerard O'Brien.

Almost 3000 television sets are thrown into the Green Island landfill each year, 42 times the number recycled at the facility. Carla Green reports.

And it has been for a while.

TV sets and other electronics should be recycled - that is not in dispute.

For one thing, they are made of multiple recyclable components - copper and some precious metals in most; glass; lithium in batteries; phosphorous dust.

And they also contain a couple of different chemicals and heavy metals that should be disposed of properly - gallium arsenide; flame retardant; lead; mercury.

But, for the most part, electronics - and television sets in particular - are not recycled.

They are thrown away.

Jon Thornhill is the director of eCycle, an Auckland-based company which processes television sets recycled by way of Green Island.

He says a modern landfill would probably contain the toxic waste inside television sets, preventing the chemicals and heavy metals from leaching into the groundwater.

But, he adds, "I don't think anyone could ... tell you there's no problem with putting [electronic waste] into the landfill.''

And he says the landfill team has a variety of mechanisms to keep the toxic waste - called "leachate'' when it mixed with water - from getting into the nearby Kaikorai Stream.

"Based on current monitoring results, it seems to be very unlikely that there's any leachate leaking from the landfill into the environment,'' he says.

Still, electronic waste being disposed of in the landfill is less than ideal.

The more heavy metals there were in the landfill, the more toxic the leachate became, he says, which means throwing electronics away at Green Island contributes directly to making the landfill's leachate more toxic.

On all fronts, Mr Hanan says, recycling electronics and disposing of their toxic chemicals properly is "the right thing to do''.

The problem is that recycling television sets is expensive - almost prohibitively so.

Recycling a set at Green Island costs $40, but disposing of a small load of rubbish costs just $13.

That is probably why an average of eight television sets per day go into the Green Island landfill, while only 69 are recycled all year long.

Mr Thornhill says his company processes a whole host of different kinds of electronic waste, including laptops, printers, and photocopiers.

And his company charges for recycling those other kinds of electronics, too.

But television sets are "the big one'', he says.

Unlike some other electronics, like computers, the cost to recycle a television set is almost equal to the cost generated from selling its recyclable components.

"They basically level each other off - it's a cost-neutral scenario.''

So where the money to be earned from other electronics might subsidise the recycling charge attached to them, television sets have no such advantage.

"The charges for us are to cover labour and fixed costs,'' Mr Thornhill says.

So if people want to recycle television sets, he says, they have to pay those costs.

There have been efforts to address the cost of television set recycling in the past, particularly around the switch from analogue to digital television.

In 2012, the Government subsidised a national takeback scheme where about 3000 televisions were recycled in Dunedin.

There was another government programme in 2011 where television sets could be brought to The Warehouse for recycling.

But the price always goes back up. And when it does, the popularity of recycling electronics drops back to almost nil.

"It's been the same for the last few years,'' Cr Wilson says.

Meanwhile, valuable commodities are disappearing into landfills in the form of electronic waste.

"[Electronics have] all got things that at some point will become rare commodities again - batteries with lithium [for example],'' she says.

"It's a frustration. The Government probably could've progressed a hell of a lot quicker.''

One possible solution - and one that has been proposed in the past - would be building the cost of recycling into the products themselves, and enlisting retailers to take on responsibility for disposing of the products they sell.

That may come in the future, Cr Wilson says.

But unless something changes, television sets will keep ending up in the Green Island landfill - to the tune of 2920 a year.

Depending on the television set, they can have ...