By Daisy Hudson
16 Comments
George St has gone dotty, but it appears the new road rules are taking time to sink in.

After Dunedin city councillors voted last week to reduce the speed limit from 30kmh to 10kmh in the main street to encourage physical distancing among shoppers, large coloured dots appeared on the road at the weekend.

The dots, intended to remind people the area is a shared space, will likely remain until physical distancing measures are no longer required.

However, while new speed signs were erected hours after Friday’s decision, motorists did not appear to be taking much heed over the weekend.

Most vehicles were observed exceeding the new limit on Saturday. 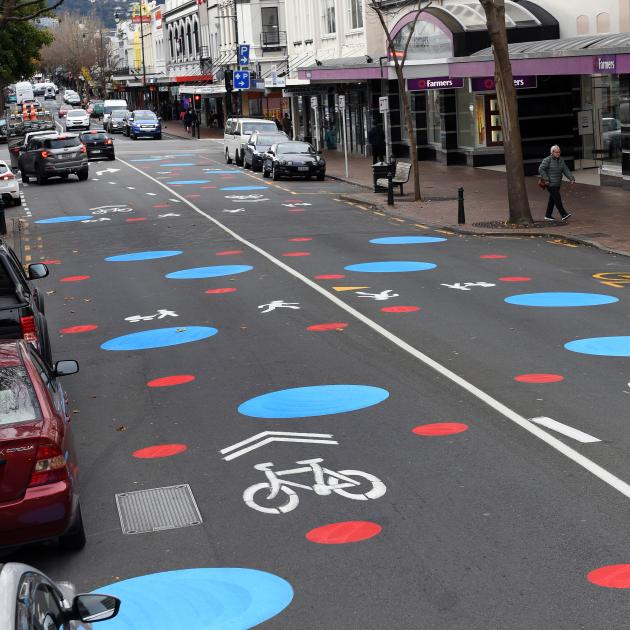 Brightly painted dots appeared on George St at the weekend to highlight that it is a shared space. PHOTO: STEPHEN JAQUIERY
The changes drew the ire of many people on social media, which did not pass unnoticed by the council.

A spokesman said the council had received a small amount of feedback directly on the temporary change, "although a larger volume of comments on social media has also been noted".

Traffic monitoring data collected at intersections showed the changes were achieving the desired result, he said.

The council has had discussions with police about the enforcement of the temporary 10kmh speed limit, the spokesman said.

Senior Sergeant Craig Dinnissen, of Dunedin, said while George St would be covered by police patrols, it was not a priority target area.

That was because police were still seeing "excessive speeds on the open road, intersection crashes and red lights being run" elsewhere.

"So deployment will continue to focus on those areas were we see the greatest harm occurring."

Snr Sgt Dinnissen was unaware of any fines being issued for speeding on George St at the weekend.

DCC stands for the Dunedin Cartoon Chanel, on display with lots of colours, bubbles and signs, and on going and on in an ever taxing saga to continue tomorrow, unfortunately....

As an ex-road cyclist and cycling activist back in the 1980s way before cycling was fashionable, I would not have supported this traffic layout. In the past, I did a lot of research on cycling and urban planning with the goal of sustainable transport, NOT recreational cycling ( transportation cycling is completely different) and one conclusion was crystal clear: SHARED SPACE AMONGST DIFFERENT TRANSPORT MODE IS INHERENTLY DANGEROUS. Under normal conditions ( not social distancing) we already have some degree of MIXED MODE SHARED SPACE. For example, pedestrians crossing the road or cyclists on the road with cars. Whenever their paths cross, there is risk of danger through confusion, vehicle handling differences and speeds, visibility , all kinds of variables. So traffic management should as much as possible avoid shared spaces and intersections, especially between travel modes. Each and every intersection between modes is a danger. DCC has done the direct opposite. Expect collisions.

What a way to sink the boot in to retailers, inhibiting the flow of customer traffic, nice one Aaron you got your way after all.

Hope the soup kitchens are a little easier to access, I'm sure demand will be high.

They want us to stay well clear. To keep our cars off the main street. They want us to be manipulated, to be talked down to, to be submissive and love it if we are annoyed. They think "Oh that will pass and the public will get used to it. Opposition will soon quieten down. We will be able to push the boundaries and make it permanent in time. Softly, softly, and sometimes suddenly like this time." City Councillors speak up and get this reversed.

Maybe a guy with a red flag in front of vehicles would help?

I consider myself as an environmentalist but this is just madness! Just look at what these people have done to our beautiful historic city! If the council thinks these temporary changes will lead to long term behaviour changes, they are wrong, theses changes will do more harm than good both environmentally and economically while having little to no effect on social distancing.
"Susan Kenyon, an academic who specialises in travel and behaviour change, said it was simplistic to assume that building more cycle lanes and closing off roads to traffic would, on its own, lead to long lasting changes in behaviour.
Kenyon said everything from people’s work journeys to access to healthcare and education, shopping to leisure activities had been built on the assumption that people could travel long distances with ease.
“The reality of people’s everyday life is that you cannot walk or cycle to everything you need to do.”
She said policymakers would need a more root and branch approach, challenging the assumption of mobility by encouraging home working, improving broadband access and “re-localising” services".

I just tried to drive along George St at 10kmh. It's actually quite difficult watching the speedo (as 10kmh is an unusual speed to keep to) at the same time as watching for pedestrians and being distracted by the silly coloured dots. If the DCC are hoping to keep me, my family and my car, out of the central city they have succeeded brilliantly. There are plenty of other hassle free shops to visit away from George St.

It is different.. 15 i can just do.. but any less and my car stops. its rather painful .. i feel maybe the council will be laughing at the people ... its strange one.. prepare for accidents round xmas on that road.. with scooters .. bikers etc.. students

Do my eyes deceive me? I cannot imagine this smattering of infantile road graphics will assist people in reading actual legal road markings, did the DCC consult with Land Ministry of Transport before indulging in this colouring in exercise? The effect is somewhat reminiscent of a stage set from Charlie and the Chocolate Factory circa 1971, with a good dash of late 60s psychedelia. Frankly, its embarrassing, I could understand such graphics in a junior school playground, but not on our main street.

It looks like a set of the Wizard of Oz. We are the imprisoned munchkins and the dots represent the state of the councillors mind.

The documented facts and risks around Covid-19 don't even remotely support these changes to 10kmh, road markings etc. In the absence of any logical basis it must be assumed that the council has acted irresponsibly out of irrational fear OR this reflects a different agenda under the guise of Covid-19. Neither is acceptable but as ratepayers we have a right to expect responsible spending, rational actions and honesty.

Well Done Green Mayor you are outstanding in your field you will go far the sooner the better for Dunedin, did you get a bad batch?
Nah seriously I truely feel sorry for you and pitty you. Most fathers would say yeah son I use to drive a Mac truck, I was int eh Defence force, That time I helped the old man and lady. I stopped a fight at the pub, I helped built that chimney at burn side, what will you tell your child yeah son I was so out of it I stuffed the whole town, that one time at DCC Camp when I put dots all over the road and the suckers fell for it. or that one time when I got the slaves at the DCC to make you a sand pit when you were 3. And I used to sponge a ride to and work yeah thats right son.

anyone else having issues staying at 10km???

Hahahahaha, Hahahahahaha - is this for real? Come on DCC, what are you thinking? You clearly have no idea of reality.

I don't think dots on the road are enough to make the space "feel" like a 10kph speed is appropriate. What about temporary planter boxes up the middle of the street. I think any comments about whether or not this will be negative or positive for retailers will have to wait until there has been a trial.
This sort of temporary trial of something that can easily be reverted is so much better than going out to consultation on it: consultation would have costed the council more and people would be basing their submissions to the consultation on gut instincts rather than seeing what actually happens. Overseas experience has been that making places more friendly for people is better for retailers than leaving them as busy motor vehicle dominated places. Lets see what happens, but Aaron please add some planter boxes to make it feel like 10kph is an appropriate speed through there.