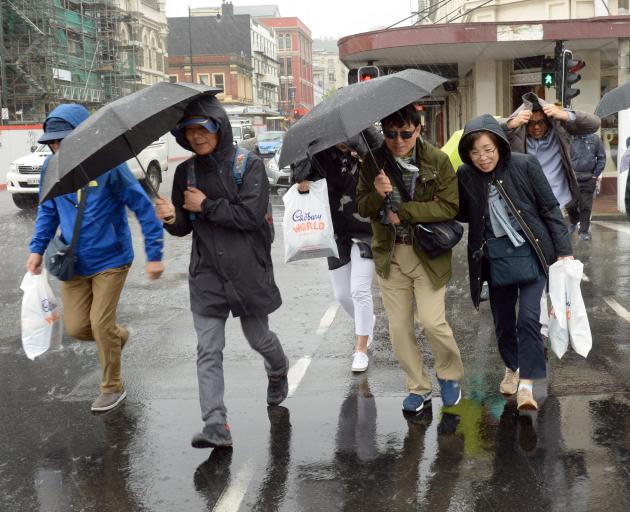 Tourists run across Castle St towards their waiting bus at the Dunedin Railway Station during a downpour yesterday afternoon.

The hail was mixed with rain, and the city had at least two more heavy showers later in the afternoon.

Mr Adams said the hail, just after 3pm, was not particularly unusual.

''We've got these southerlies going up, and with southerlies you do quite often get these unsettled conditions,'' Mr Adams said.

Today would be a ''much nicer day'', apart from a few showers around Otago Peninsula.

''Thursday looks like a nice day, and then it's looking settled until we get through to Sunday.''

Rain was likely to arrive in Dunedin later in the day on New Year's Eve.

The day would be warm, with an expected high of 24degC.

''It's too far way to really pin it down for sure.

''It all depends just what this trough does as it gets closer to New Zealand,'' he said.

On Friday and Saturday, Dunedin's weather would be settled; the expected highs were 20degC and 22degC respectively, the MetService website shows.

In Queenstown, the pattern looked similar, with rain on Sunday accompanied by a high of 24degC after a couple of days of fine, settled weather.