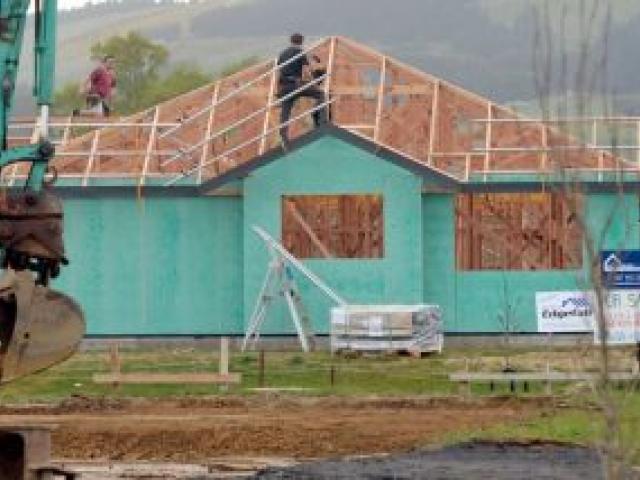 Scaffolders work on a house in the Highland Park subdivision in Mosgiel. Photo by Stephen Jaquiery.
The building boom in Mosgiel is keeping local builders busy, with one company increasing its resources to compensate for demand in the area.

A1 Homes sales and project manager Tony McFadgen said his team were very busy in both Mosgiel and the wider area.

A1 Homes had nine homes being built at present, with three of those in Mosgiel, but had a lot of work coming up in the town.

Mr McFadgen said the company had upped its profile and employed more resources to cater for the boom.

A1 had built a show-home in the Highland Park subdivision due to the increase in building in the area.

''It is nice to be able to see return of benefits.''

Dixon Homes Otago Southland director James Crooks said the company had been very busy lately in both Mosgiel and the wider area.

He said in Mosgiel a lot of the work was in new subdivisions.

''The last couple of years have been a bit quiet but it is a lot busier now,'' he said.

G J Gardner Homes Otago managing director Laurie Mains said there had not been a good amount of ground made available for subdivision in Dunedin for a very long time.

Syd Brown had done a fantastic job developing Highland Park subdivision which drew a wide range of people to build there, contributing to the boom, Mr Mains said.

''This development and the number of show-homes Syd encouraged with his help to builders, is the reason Mosgiel is so vibrant.''

REINZ regional director Liz Nidd said Mosgiel was always going to have a lot of building because so little flat land was available in Dunedin.

If people wanted to build on flat land in the wider area, Mosgiel was the place to go, she said..

In terms of real estate demand, there was always a surge in summer. However, newly built homes could take some time to pop up on the market, she said.