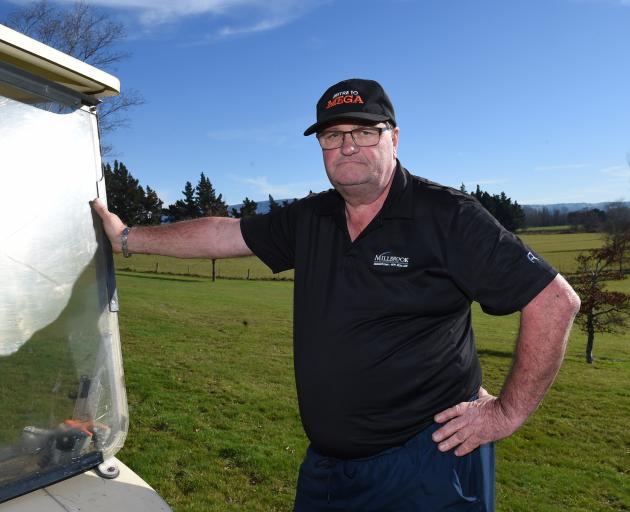 Life member and former president of the Gladfield Country Golf Club Wayne Ferguson hopes a sale of an under-used part of the club's property for a lifestyle development will stave off closure of the club. PHOTO: GREGOR RICHARDSON
A Dunedin golf club says it could be forced to close if it is not allowed to subdivide part of its property and sell it as a lifestyle block.

But neighbours of the Gladfield Country Golf Club, beside State Highway 1 on the Taieri Plain, fear any new housing in the area will only exacerbate problems with stormwater and flooding.

The club has applied for consent to subdivide its 21ha property into two lots, to carve off a 5ha section fronting Gladstone Rd South.

The club was also seeking a new land-use consent for the new lot, allowing a single house to be built on the site to maximise its sale value.

Club past president David Johnson, speaking at a consent hearing yesterday, said the club had leased the property for many years but bought it, for $500,000, in 2000.

It still carried an interest-only loan from Westpac, worth $277,000, but the bank had asked for the loan to be repaid in full last year, he said.

The bank had eventually agreed to extend the loan by two years, but only if the club agreed to investigate a subdivision, he said.

If the subdivision and new land use were approved, a sale would allow the club to repay its loan and have some reserves.

Otherwise, it was likely the golf course would be put on the market and the club - with 65 members - would be wound up, he said.

The proposed 5ha lot covered a paddock that formed part of the club's property on the edge of its golf course.

The area was used for baleage, grazing and other uses, such as firewood cutting, at different times.

The lower part of the site was also subject to flooding, and covered by the Otago Regional Council's flood designation, although the building platform would be on higher ground.

Consultant planner Robert Buxton said the proposal did not comply with residential density rules but was considered a "true exception", and recommended consent be granted.

The club's application had attracted 12 submissions, including 10 in support, arguing the land had no other use and a sale would support the viability of the club.

However, two neighbours - Karen Baughan and Kevin Wilson - opposed the development, their concerns including the increasing threat of flooding.

Ms Baughan, who lives next door, said flooding already made her driveway impassable every 12 to 18 months.

A new house next door would divert more floodwater and debris on to her property, as well as creating extra problems with access and stormwater management, she said.

Mr Wilson said he had lived and worked in the area for 50 years, and believed flooding problems were getting worse as more new houses diverted more water into the nearby Owhiro Stream.

"As time goes by, the flooding will only increase the more houses are built," he said.

He recommended the committee approve the subdivision, but not the change in land use, which would allow the club to sell the land but prevent any new house being built.

The hearing moved into non-public ahead of a site visit, but a decision is expected within 15 working days.