Debby Willocks (centre) and a group of Owaka Golf Club members and partners fill in time at the Law Courts Hotel while waiting for their flight to Australia. PHOTO: PETER MCINTOSH
A group of Catlins golf enthusiasts scored a triple bogey yesterday, before their long-planned golfing holiday even began.

The Owaka Golf Club members and partners were among passengers held up for almost a day when the Virgin Australia flight VA120 from Dunedin to Brisbane was delayed.

The flight was due to leave yesterday morning, but shortly before its departure time it was found the plane's windscreen was cracked, club member Debby Willocks said.

"By that stage the bus was on its way back to the Catlins.''

Eventually, the bored golfers teed off in the direction of Dunedin, and spent most of the day at the Law Courts Hotel waiting for their plane to be repaired. 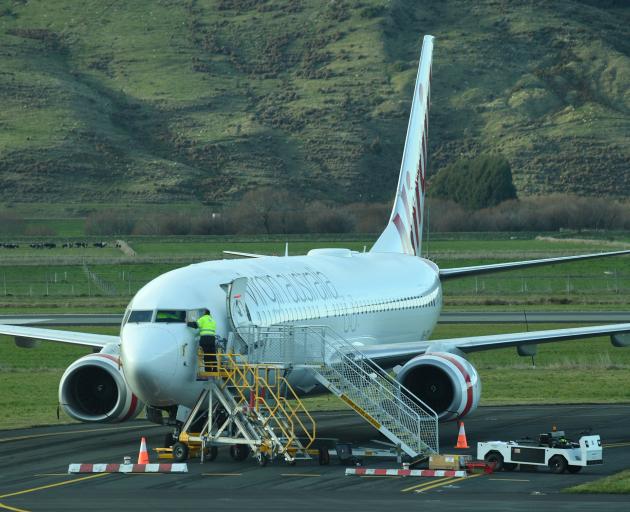 The stricken Virgin aircraft still on the tarmac at Dunedin airport this morning. Photo: Stephen Jaquiery

"Virgin Australia should have paid for a shuttle or something,'' she said.

It is understood Virgin supplied meal vouchers for passengers who opted to wait at Dunedin Airport.

The golf club is celebrating its 50th anniversary this year.

Members had already had to cancel one round of golf because of the delay, but hoped to get plenty of holes in before they returned home on Sunday.

A Virgin Australia spokeswoman said engineers spent most of yesterday inspecting the aircraft, and it was hoped it would be cleared for takeoff last night.

A Virgin spokeswoman confirmed passengers on flight VA120 were delayed for hours yesterday while the company organised a replacement flight, to take passengers from Dunedin to Brisbane.

The flight was due to leave in the morning, but did not depart until 8.45pm on Monday.

"We flew in a replacement aircraft when we could," she said.

"We do apologise to our guests."

Today's flight back to Australia would not carry passengers, she said.