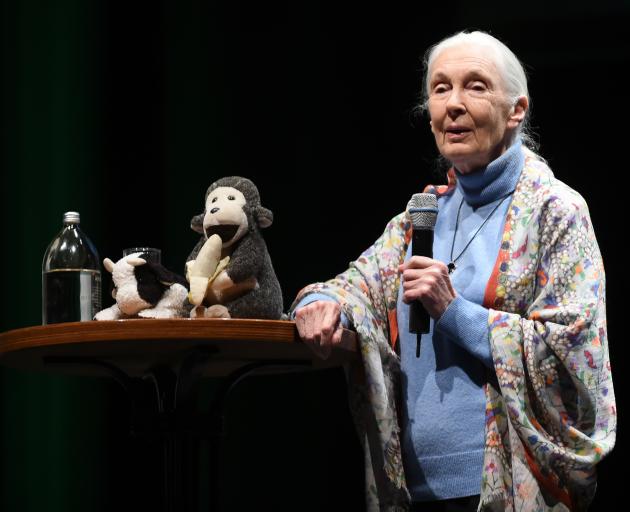 Dunedin was the first stop on a national speaking tour for the pioneer of studying wild chimpanzees.

One audience member had tears streaming down her face as she listened to the Dame of the British Empire speak about her life.

Dr Goodall talked to the audience directly for about 30 minutes.

She recalled being drawn to nature from an early age.

As a 4-year-old, she took earthworms to her room but was stopped by her mother, who explained the worms needed to be returned to the garden to survive.

She talked fondly of a mother who enabled a career to which she would devote her life.

Her career began with an invitation from a school friend to visit her family's farm in the Kenyan highlands, where she met anthropologist Dr Louis Leakey.

She accepted his offer for her to study the area's wild chimpanzee population.

He believed her lack of university education could give a fresh perspective.

Dr Goodall talked about first meetings with chimpanzees and the ''breakthrough observation'' of the primates using primitive tools to harvest termites from a nest.

She talked about the similarities between chimp and human behaviour and talked about hope for the natural world.

The presentation was followed by a conversation with Radio New Zealand presenter Kathryn Ryan.