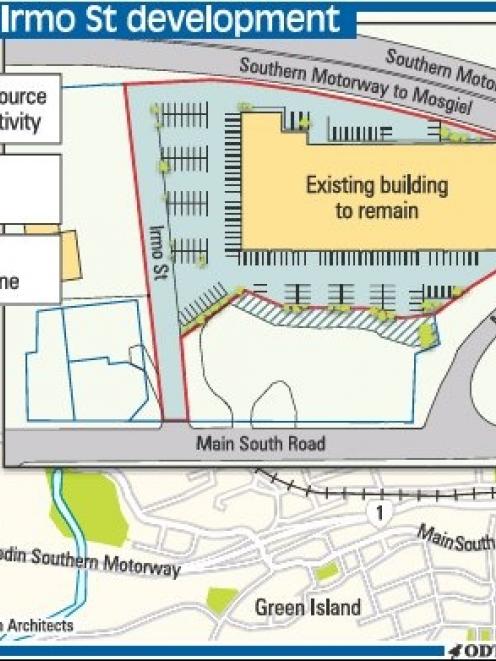 Proposed Irmo Street development
A major multimillion-dollar retail complex should soon be under construction in Green Island, after successful mediation between the Dunedin City Council and the developer.

The council agreed to the development subject to a restriction on the number of tenancies, and the types of goods sold, though the matter is subject to final approval by the Environment Court.

Irmo Properties director Grant Chirnside last month said there was no date for construction, but the company would begin looking for tenants soon, and begin the construction phase after that.

The project was made public last January, with plans for the restoration of the rundown iron roller mill building in Irmo St, Green Island, and its development into a 4900sq m retail complex with 187 car parks, released.

The company owns land and buildings in the area, and the site's main World War 2-era industrial building would be refurbished, with timber beams and other fittings retained, at an estimated cost of up to $2 million.

The development was to provide a mix of bulk and specialist retailers, but required resource consent as the site was on land zoned for light industrial use.

The proposal prompted opposition from residents and business owners, including the Greater Green Island Business Association, with concerns the new addition, north of the existing Green Island retail area, would split the community in two.

In August, the proposal was rejected by the council hearings committee, of which Cr Colin Weatherall was chairman, because of "somewhat overstated" claims about the development, and fears Dunedin's other retail zones could be undermined.

In November, the council began mediation talks with the developer aimed at avoiding an Environment Court battle over the complex.

The council has announced it had reached agreement with the company, and the development could go ahead.

Cr Weatherall said the company had sought consent for a development where there were no controls on the number and size of tenancies to be established.

"While the original proposal was declined, the council's concerns about the lack of certainty with the proposal have been resolved through an agreement to restrict the development to eight tenancies.

"Other changes will result in the majority of the tenancies being large stores over 500sq m, and the list of permitted goods will provide for trade-related retailing on the site."

Mr Chirnside said the original application included exclusions on activities such as super-markets, and now had clothing, footwear stores, and others added to that list.

Examples of stores it could have were furniture, home electronics and sports equipment.

The development showed the company's commitment to, and confidence in, Dunedin, MrChirnside said.

He has also been involved in the development of the Roslyn Fresh Choice supermarket, the Noel Leeming store, the Contact Energy call centre and the Harvey Norman retail andcommercial office complex in Dunedin.