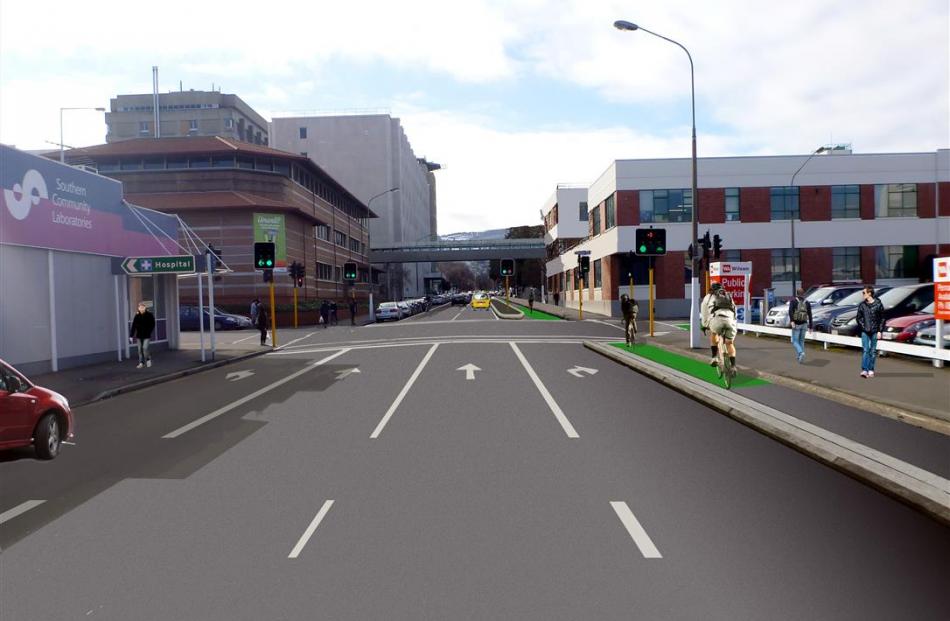 Construction could begin this year on Dunedin's $8 million separated cycleways along the city's one-way system.

The New Zealand Transport Agency, which will fund the work, has signed off on a detailed business case setting out the need and basic design of the cycleways.

They will be separated from traffic by concrete kerbing and will run along the right-hand side of both the northbound and southbound one-way routes.

Stretching from the Dunedin Botanic Garden in the north to Queens Gardens in the south, the cycle lanes will narrow in places to accommodate high-turnover car parking.

Those reviews allowed staff to look at the city's cycling needs from scratch. Of all possible routes, only George St was considered a realistic alternative, but was deemed too narrow and busy.

Options closer to the harbour were deemed too distant from where most cyclists wanted to be.

The review subsequently found separated cycleways along the one-way system were the best choice for the city.

Only small alterations had been made to the plans, including slight changes to parking and to integrating the cycleway with existing footpaths, he said.

"We're confident now the detailed design can take the preliminary design from good, to really great.''

NZTA southern business unit manager Ian Duncan said the plans, which were shown to about two dozen affected parties yesterday, were without doubt the best option for the city.

The next step was to have detailed designs completed, a process expected to take between six and nine months.

Funding for that work, to be completed by engineering firm MWH Global, had been set aside, Mr Duncan said.

After detailed designs were completed, tenders would be sought, with construction to begin, ideally, late this year or early next year.

Construction was expected to take 18 months.

Mr List said concerns about cycleways on a high-traffic stretch of state highway were not borne out by evidence in other centres.

Separated cycle lanes had recently been added to high traffic routes with frequently heavy vehicle movements in both Auckland and Wellington without problems.

Resistance to cycle infrastructure was "pretty common'' the world over, Mr List said, including in known cycling centres such as Amsterdam, Copenhagen and Portland.

But that resistance tended to soften once the infrastructure was up and working.

New Zealand was entering a "new paradigm'' of cycle infrastructure construction, with $350 million to be spent around the country over the next three years and an expectation cycling levels would increase by 30% to 10 million trips a year by 2019.

"People want it. We know cycling makes our cities great places to live. We're committed to growing cycling in New Zealand and making it safer.''

"It makes our city a lot safer and it makes it a lot more connected.''

While car parking issues were a potential negative, business owners along the route had offered clever and positive ideas about how those problems could be minimised.

Converting the council's Frederick St car park to a multistorey facility was also "on our radar'', Cr Wilson said.