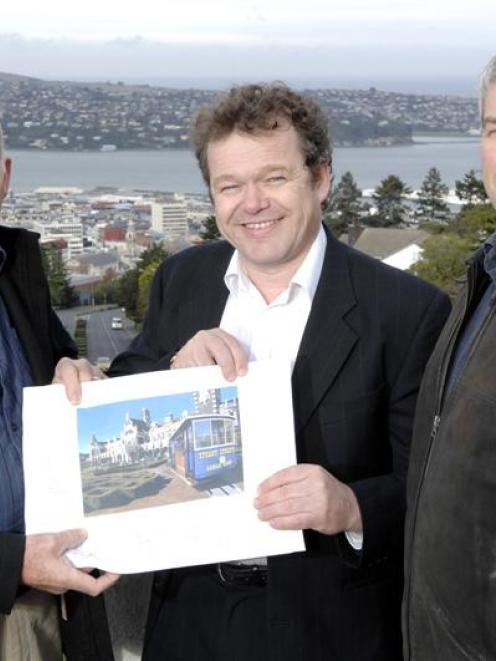 Dunedin men (from left) Graeme Burgess, Eckhard Marthen and Chris Reid are developing plans to have a cable car service reinstated on Stuart St, Dunedin, between the railway station and Kaikorai Valley. Photo by Linda Robertson.
Ferries on Otago Harbour? Trains on the Taieri? What next, cable cars in Dunedin? Why not, say supporters of a plan to have cable cars reinstated on Stuart St for the first time since 1947.

The website includes preliminary drawings of the cable cars, tracks, and vehicle storage and museum facilities in Kaikorai Valley.

Graeme Burgess, of Dunedin, said he started developing the idea in 2005 after reading a letter to the Otago Daily Times from a member of the public which simply asked "if they could do it then [in the 19th century], why can't we do it now?"

Cable cars, which run on rails while attached to a cable driven by an electric motor, were an "environmentally friendly" alternative to diesel vehicles, he said.

Dunedin accountant Eckhard Marthen and photographer Chris Reid have since joined the group, and say working on the project (gratis) has been time-consuming but rewarding.

The cable cars would initially operate as a tourist attraction, but services could be expanded to accommodate commuters.

The group met a tourism management consultant on Tuesday to discuss ways of advancing plans and gaining funding.

Mr Marthen said the costing plan had been verified by a chartered accountant.

The proposal was presented to the Dunedin City Council three weeks ago.

Mr Burgess said the group acknowledged the plan was ambitious, and preliminary estimates put project costs at about $13 million.

"We thought it would fit in well with existing historical features in the city and, with the better technology available now, it should be possible."

The cable cars could be constructed in Dunedin, the group said.