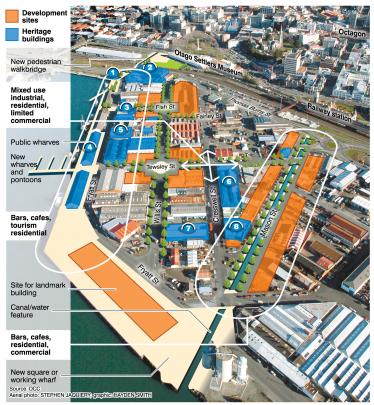 It was a decade-long project that cost the Dunedin City Council millions, only to be labelled a ''grandiose'' mistake.

But one of the key men behind the harbourside plan change, former council chief executive Jim Harland, says it might be time to ''have another look''.

Mr Harland was commenting in the wake of fresh calls for the redevelopment of Steamer Basin into a hub of cafes, bars, restaurants, accommodation and public spaces.

Mr Harland told the Otago Daily Times it made sense to focus initially on the remainder of the harbourside zone, south of Steamer Basin.

But the imminent closure of the Esco foundry, north of Steamer Basin, would spell the end for one of the major objectors to the wider harbourside plan, he noted.

That meant attention could also again turn to the industrial zone north of the basin, where the original harbourside plan had been focused, Mr Harland believed.

''Maybe the time is right to have another look,'' he said.

Mr Harland's comments came two years after it was revealed the harbourside plan change had cost the council more than $2.6 million in property purchases, legal fees, payouts and other expenses.

That was after an Environment Court appeal led to drawn-out negotiations with a cluster of harbourside businesses and the Otago Chamber of Commerce, resulting in a dramatic scaling back of the vision.

The deal meant the harbourside zone shrank from a wide swath of waterfront on both sides of the basin, to the much-reduced zone south of the basin.

The original harbourside plan had envisaged redevelopment over 50 years to create a harbourside populated by apartments, bars, a hotel, tree-lined boulevards and canals on the north side of the basin.

The plan was the work of the DCC and Port Otago subsidiary Chalmers Properties, and was unveiled in mid-2005.

Among the ideas touted, Mason St was to be transformed into a ''grand boulevard'' featuring an ''Amsterdam-style'' canal or shallow water feature, which could be frozen in winter for skating or curling.

The canal idea was later dropped, even as the vision expanded in 2006 to include the area south of Steamer Basin, including public events area, new wharves and pontoons, linked together by new walkway.

However, the concept ran into opposition from business owners, who criticised the project during a plan change hearing in 2008.

A decision to approve the rezoning was announced in early 2009, but that prompted the Chamber, Otago Regional Council and five companies to lodge an Environment Court appeal in April the same year.

After drawn-out negotiations, the parties agreed to compromise and the harbourside zone was scaled back in 2012 to the area south of Steamer Basin.

That triggered the district plan being rewritten to allow mixed uses south of the basin, along with a design code to ''manage and influence'' development, public access and visual appearance.

Mr Harland said this week the original harbourside plan change had sought to accommodate existing businesses while allowing for changes to land use over time, should industrial users close down or choose to relocate.

It made sense to begin by developing the southern side of the basin, as it was north-facing, now unencumbered by planning constraints, and the closest area to the regenerating Warehouse precinct, he said.

''If they could achieve development on that side, and integrate it back into the city, then that would be a good thing.''

But, with the imminent closure of Esco's foundry, ''maybe the time is right to have another look'' at the northern side of the basin as well, Mr Harland said.

''It was always intended to be a long-term vision ... the concept is still intact.''