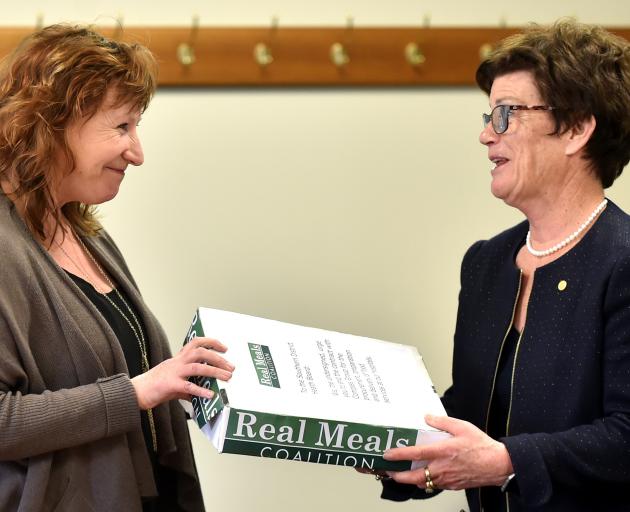 The SDHB has faced criticism over the quality of the frozen meals since previously in-house hospital kitchen meals were outsourced in January.

The petition was presented by Dunedin South MP Clare Curran.

Ms Curran said the Compass contract was a "flawed project" which had caused a lot of grief for people in Otago and Southland.

The Labour Party was advising all other district health boards in the country to refuse or rethink their decisions to sign similar outsourcing contracts, she said.

Members of the Real Meals coalition, a group opposed to the contract, consisting of community groups, political parties and trade unions, also spoke at the presentation.

Coalition spokeswoman Anna Huffstutler said the outsourcing of meals-on-wheels food  impacted the elderly not only because the new meals were not as nutritious, but because some elderly benefited from the contact they had with the people who had delivered them.

SDHB board member Elaine Chisnall said people accessing meals on wheels would have had contact with people from other services as well.

Mrs  Grant said the sentiments expressed at the presentation mirrored those voiced at earlier protests opposing the contract.

She could not formally comment on the petition until it had been properly considered by the commission.

Deputy commissioner Richard Thomson said a survey of SDHB patients showed satisfaction with meals in July was over 90%.