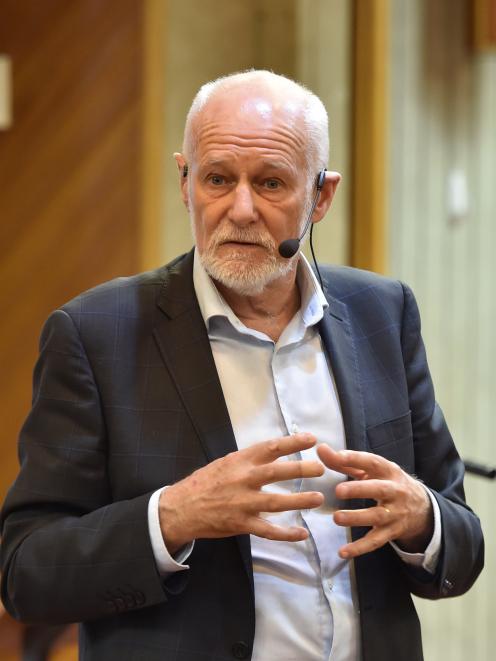 Pete Hodgson
Southern District Health Board chairman Pete Hodgson has reiterated his offer to the Government for the region to be a test case for compulsory fluoridation of drinking water.

Parliament is soon to consider legislation which would remove decision-making power on whether to add fluoride to drinking water from local authorities and give it to the director-general of health.

Mr Hodgson, a former minster of health, is a strong proponent of fluoridation, and at a board meeting in June he urged that the SDHB be proactive in promoting the practice so as to improve dental health.

Yesterday a board committee meeting was briefed by dental public health specialist Dr Rob Beaglehole on a range of public health issues, which included fluoridation.

Dr Beaglehole, a leading advocate for a tax on sugary drinks was, unsurprisingly, all in favour of efforts to increase use of fluoride, and said scientific proof it helped prevent tooth decay was incontrovertible.

Water supplies in Dunedin and Invercargill are either entirely or mostly fluoridated, but Clutha, with 58.7% fluoridation, is the only other significant community in the South to have its water treated.

Mr Hodgson said that since the June meeting he had met southern mayors about the issue and had also spoken to Associate Health Minister Ayesha Verrall about fluoridation.

He had offered the SDHB to be "first mover" in the introduction of any new fluoridation policy, and Dr Verrall had asked for further information about what the SDHB hoped to do, Mr Hodgson said.

"It’s an idea which if it is to go ahead we will need some coin to go ahead, particularly in the smaller areas."

"I want you to know that there is a degree of enthusiasm here, or I’m putting my hand up anyway ... and a degree of OK let’s give it a go from civic leaders, but we’re not sure what from the ministry."

Dr Beaglehole said he would discuss the issue with the ministry’s chief dental officer.