There is no crisis at Dunedin Hospital, and the Southern District Health Board still needs to clear its deficit, Prime Minister Bill English said in Dunedin yesterday in response to questions about ongoing health woes in Dunedin.

In urgent cases the board should send patients to other centres, even if it cost money, he said.

But when asked, he said he was not saying chief executive Chris Fleming could relax the stringent deficit elimination target.

"No. No. It’s up to the management to run the hospital, and meet the requirement to balance their budget, but in individual cases I would expect they take the steps they need to to ensure they get good care," Mr English told reporters.

High-profile cases include a woman who says her father died after his heart operation was postponed four times, and a group of prostate cancer patients  waiting too long for surgery.

Asked if the hospital was in crisis, he said he had not "seen evidence that there’s a crisis".

Surprisingly, given publicity about a shortage of intensive care beds, Mr English did not seem well briefed on the $11 million redevelopment of the intensive care unit under way at Dunedin Hospital.

He emphasised to a group of retirement village residents in Mosgiel that spending money on the hospital was a "trade-off" because the much bigger redevelopment was in the works. 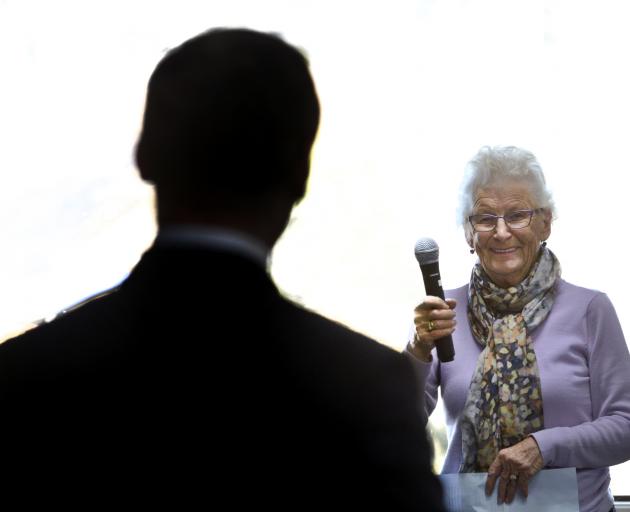 "There will be decisions about whether to spend money on the ICU now, which may be for a limited number of years but meets the need perhaps for more beds, if that’s there," he told residents.

An $11 million upgrade of the ICU got under way in June. It will open next year and is expected to relieve some pressure.

"If it’s started, I presume it’s going ahead, but I couldn’t comment in detail," he told the Otago Daily Times when asked to clarify.

She said Dunedin’s isolation made it difficult to transfer patients to other hospitals, and  cited a case of a patient transferred to Auckland incurring airfares and accommodation costs. It cost almost as much as  "another ICU bed in Dunedin", she said.

Mr English responded saying the Government put more money into health every year, and  talked about the need not to  spend too much on Dunedin Hospital when it is due for a rebuild. Afterwards, Mrs Millichip was not impressed.

"He didn’t say anything," she said.

She normally voted National, but was now undecided, she said. Mr Macfie took Mr English to task about the lack of a capital gains tax.

As a former landowner, Mr Macfie was uncomfortable about being subsidised by those who will "never own assets".

"I have benefited throughout my farming life by the absence of a capital gains tax."

Mr English said capital gains taxes were not always effective and were difficult to administer, but the Government had introduced the two-year "bright line" tax. Mr English’s speech to residents painted a rosy picture of the New Zealand economy, emphasising the flow-on effect to their superannuation entitlement.

• Urology under review because of wait times for treatment.

• Ophthalmology dealing with aftermath of resource shortfall that caused dozens of patients to lose partial sight.

And so it goes on... privatisation by neglect. I'm curious to know how Mr English would feel if HE lived in Dunedin and had prostate cancer. Do unto others Mr English and remember that there but by the grace of God go thee. Your government has brought misery to many, and you still deny culpability.

I am disgusted. How can anyone be so out of touch with this country's needs and remain its PM??? National has sooo much to be responsible for and its taking responsibility only for a few.

Do you really think anyone with any intelligence believes what your saying Mr English?Not in crisis?Tell that to the many good people that still live here in the South waiting for Surgery.I was meant to have an Operation within 4 months,that was July 2016.When I call the hospital and leave a message for an update they don't even have the courtesy to return my call.Previously they couldn't even give me a time-frame.Its a ridiculous situation here playing with peoples lives and not helped by completely ignorant politicians

Mr English you have no idea, unlike you, the rest of New Zealand can't afford private care. People in Dunedin and North Otago have a terrible health system after it was stripped with cash by an employee so the rest of the community have to suffer. Recently I was in Auckland and what an awesome health service I witnessed and often abused by people who could go to their GP. You need to talk to the community about this. Good luck on Election day, Don't see your National party representatives fighting for our health system and more funding so why should we support any party who wont support our communities. Oamaru Hospital needs more funding - what if the road is closed through snow and helicopters cant fly, do you want blood on your party's hands. Get a grip. Won't be voting National.

Is this the Prime Minister speaking? He is virtually a local and should be right up with the situation like Dr David Clark. Don't like National Party's chances at the election. Perhaps he thinks if he keeps repeating denials it will be true! Bring on Labour's new Minster of Health and a new hospital.