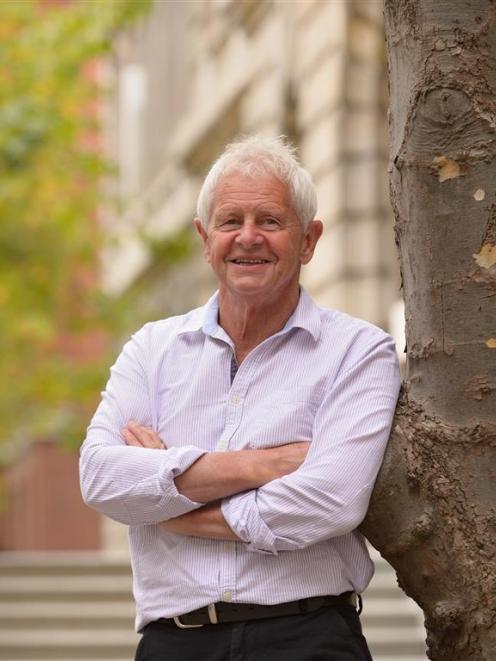 Dave Gerrard outside the Lindo Ferguson building where he trained while at the Otago Medical School. Photo by Gerard O'Brien.
A special relationship of more than 130 years between the Dunedin School of Medicine and Dunedin Hospital must not be "disregarded with the stroke of a pen'', Emeritus Prof David Gerrard tells health reporter Eileen Goodwin.

A report prepared for the rebuild of Dunedin Hospital has caused alarm at the Dunedin School of Medicine because it suggests research is a financial burden and ties up too many resources in Dunedin.

Prof Dave Gerrard said Dunedin should not be treated like just any provincial centre.

"We are special. The uniqueness of our situation is that we have a lot of undergraduate students, not only in medicine, but in health sciences, nursing students, physiotherapy students, dental students.

"This relationship has enriched the quality of clinical care that our community gets. We attract international clinicians in all our specialties.

"We get a significant amount back from this relationship.''

The report questions the need for Dunedin to have 24-hour acute respiratory physician care, which is usually provided only in larger centres.

Prof Gerrard was concerned to see that type of service called into question.

"When the people who undertake the funding apply the formula, it is always determined that Dunedin's got an over-abundance of doctors.

"Well, hello, that's because we are an institute of learning and teaching, and of course we've got more doctors.''

Prof Gerrard, who recently retired, said some medical school staff felt "their contribution to research and teaching is being undervalued and ... regarded as a drain on resources''.

Medicine made progress through research, he said.

"You've got to get development in health from somewhere, and it comes from the academic side.''

Associate Prof Gordon Sanderson, who works part-time in the medical school, believes the hospital should be formally rebranded a teaching hospital, and his "unequivocal'' view was that the report was deeply flawed.

"They see [the medical school] as a noose round the neck.''

The report suggests configuring hospital wards on a generalist rather than specialist basis.

"Why would you come to a hospital like Dunedin as a neurosurgeon when there is no specialist neurosurgery unit?''

Prof Sanderson said doctors worked in "silos'' and it was unrealistic to expect them to change.

"Physicians don't talk to surgeons; they don't like each other.

"The risk is we'll lose what little we've got if we force them to get on nicely together. It might work but it's a bit of a social experiment.''

He believes there is an agenda to downgrade Dunedin Hospital.

Another staff member, who declined to be named, said university physicians were "absolutely up in arms''.

Anonymous quoted comments in the report were treated as "gospel''.

"The debate has been how best to respond to it,'' the person said.

The official response from the University of Otago has been cautious.

Health sciences pro-vice-chancellor Prof Peter Crampton declined to be interviewed last week, and this week has been on leave.

Medical school dean Prof Barry Taylor said the academic link should be seen as a "plus rather than a negative''.

But Prof Taylor sees positives in the report, and supports a shift to less specialised acute care.

"We are way behind the eight-ball in changing the model of care - we're 30 years behind.

"There are sub-specialists now who are doing a [24-hour] roster and yet might be called in once or twice a year.''

The hospital would still employ highly specialised doctors, but "it just means you use them in a different way''.

If some doctors did not want to work in co-operative teams, they needed to "leave and go somewhere else''.

Prof Taylor supports Dunedin retaining cardiothoracic surgery and neurosurgery, and said there needed to be decisions at the top level to direct more South Island patients to Dunedin.

Southern District Health Board chief medical officer Dr Nigel Millar said there were opportunities for the medical school in the rebuild, and the changes were not a threat.