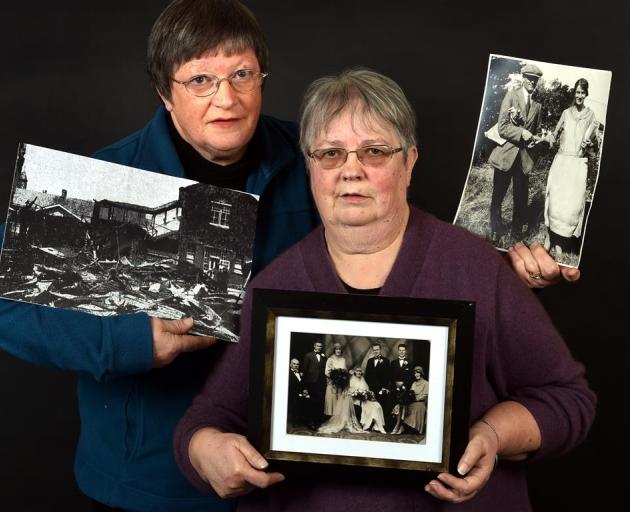 Liz Miller (left) and Wendy Hellyer with photos of relatives who died in the 1942 fire at Seacliff Mental Hospital, as well as a photo of the fire. PHOTO: PETER MCINTOSH

The 37 women who perished in the Seacliff Mental Hospital fire should be remembered for who they were, not just for the fire that killed them, relatives of two of the victims say.

And at the moment, there is no public memorial to mark even the fact of their deaths on December 8, 1942, they say.

Wendy Hellyer and Liz Miller are working together to establish a public memorial. They hope it will be unveiled to mark the 75th anniversary next year.

Ms Hellyer, of Milton, said she wanted to hear from other affected families to get them involved.

The pair have made no decision, but at present favour a plaque placed at Andersons Bay Cemetery, where many of the victims were buried.

The pair say that because of the stigma around mental illness, and because it happened during World War 2, there was no public memorial.

Ms Hellyer's great-aunt, Alice Owens, and Mrs Miller's grandmother, Violet Fowler, both perished. They were in the locked ward 5 at Seacliff, and only two women managed to escape.

Ms Hellyer said people tended to forget the victims had been real people. Her great-aunt was "quite trendy''.

"She wore bracelets on her arm and round her ankles. She was a stylish lady.''

Mrs Miller, of Dunedin, said she only pursued the matter after the death of an older relative a few years ago who had been "incredibly defensive'' about the fire.

After the fire, a commission of inquiry condemned the practice of leaving patients locked up without supervision, and recommended that future institutional buildings be constructed of fire-proof materials, with emergency exits, automatic monitored fire alarms and sprinkler systems.

However, it was many years before the measures were introduced in all institutions, the Te Ara New Zealand history website said.

Ms Hellyer can be contacted at: wendy.hellyer@xtra.co.nz