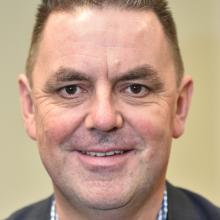 Chris Fleming.
The need for "free and frank" debate among Southern District Health Board bosses meant they kept quiet about the growing ophthalmology waiting list and cases of patient harm.

The issue was not discussed in hospital directorate reports presented at public committee meetings since May, when those meetings resumed. In December and January, the board told the Otago Daily Times it had increased staffing to get on top of the problem, which was at that time confined to Southland Hospital.

In a statement, interim chief executive Chris Fleming explained why the board kept quiet about the growing extent of the problem, which affects Dunedin Hospital, too.

"The DHB has been working through a plan for handling this situation.

"As well as needing to debate the issues in a free and frank manner, it was important we let our patients of this service know about the issues prior to disclosing it publicly through other media."

The board notified patients less than two weeks before the release of the annual national adverse events report, later this week, in which patient-harm cases have to be disclosed. It will show 30 cases of harm from ophthalmology delays in 2015-16. There is likely to be more recent cases  not included in the report. Locum ophthalmologist Dr Peter Haddad, who had tried to raise the alarm when he worked at the board, suggested last week the SDHB should suspend cataract procedures in order to focus on conditions where patients risk irreversible sight loss.

The ODT asked Mr Fleming if suspending cataract work was an option, and in response his statement said: "We are continuing our recovery pathway and will support our staff as they consider options and continue to work to prioritise our patients".

Dr Haddad last week blasted the SDHB for keeping quiet, calling the decision "grossly unethical". Ophthalmology patients often do not realise their sight is deteriorating. Mr Fleming admitted patients should have been told sooner. In an interview last week, Mr Fleming argued  the situation was in part "good news".

"One of the bizarre things is this bad news is good news. Because of advances in ophthalmology we are keeping people’s visual sight much better, and I don’t think we have adjusted the models of care to recognise the huge increase in demand."

The public meetings in which service issues are reported resumed in May after criticism the board lacked transparency.

They were scrapped last year when the board members were sacked, but it subsequently emerged  SDHB commissioner Kathy Grant was legally obliged to hold them. Earlier this year Mrs Grant said that in an "ideal world" the SDHB would have complied with its legal obligation under the New Zealand Public Health and Disability Act to hold the meetings.