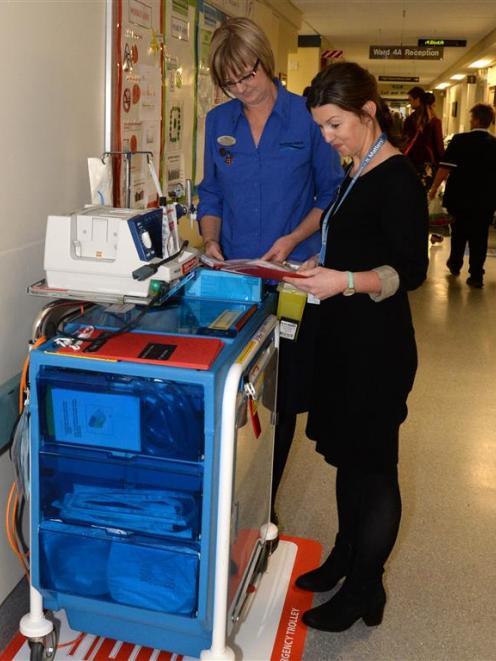 A new programme includes colour-coding medical supplies, installing mats to show correct places for equipment, minimising interruptions to medication rounds, and shifting patient handover to the bedside. Not everyone is happy with the programme.

The Releasing Time to Care project made equipment harder to find, and was a "farce'', the staff member said.

When the ODT visited Dunedin Hospital yesterday, project backers were keen to point out the benefits of well-organised wards.

Staff spent less time searching for equipment, and were less likely to be interrupted with questions about where to find things.

It was particularly helpful for healthcare assistants, or staff who were unfamiliar with the ward. 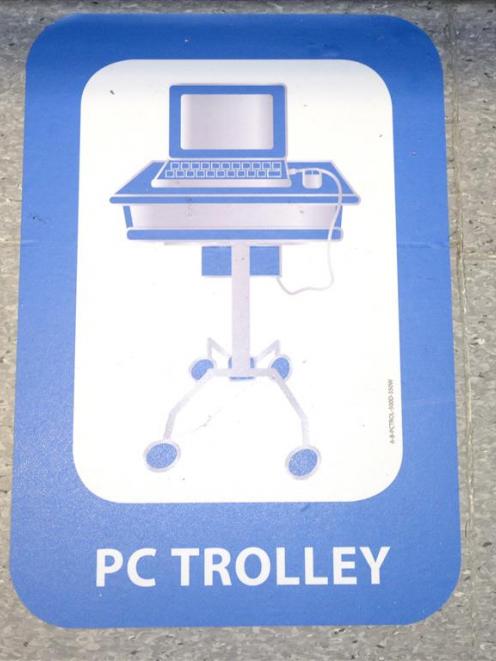 A floor mat for computer trolley.
The programme is being introduced gradually in 10 wards in Dunedin Hospital and Southland Hospital, and will be introduced in other wards later.

Many storerooms at Dunedin Hospital are full of supplies which are not organised in any particular pattern or order.

The ODT was shown the ward 8 storeroom, where items are now in colour-coded sections, making them easy to find. Ward 8 acting charge nurse manager Megan Livingstone-Young said she "absolutely'' supported the programme, as it improved patient safety.

"And we want to support our nurses to be able to have time to care, and that's what it's all about.''

"It is change, so we have to work through that,'' Ms Livingstone-Young said.

Releasing Time to Care co-ordinator Jen Gow said nurses tended to be more supportive when they saw results as changes were gradually introduced.

Evidence showed minimising interruptions during medication rounds could reduce medication errors by up to 85%, she said.

Patient handover is being shifted to the bedside, rather than in a ward office.

It meant patients could be involved in the handover process, and it saved time.

The programme was developed in the United Kingdom 10 years ago, and had been used in New Zealand and Australia for the past five years.

"We've got the benefit of hindsight, so we learn from their mistakes,'' Mrs Gow said.

Mrs Gow, a former coronary care nurse, said she was working in Britain's National Health Service when the programme was introduced, and her hospital was one of the pilot sites.

"I think we've got really good buy-in from the nurses. We're getting really good attendance at the study days,'' Mrs O'Connor said.

The programme started at Southern District Health Board last year, but Mrs Gow's role started only this year.

One of the messages from the board's controversial "listening sessions'' held this year was a desire for more time with patients, and the programme was helping with that, Mrs O'Connor said.