More wild weather on its way for South 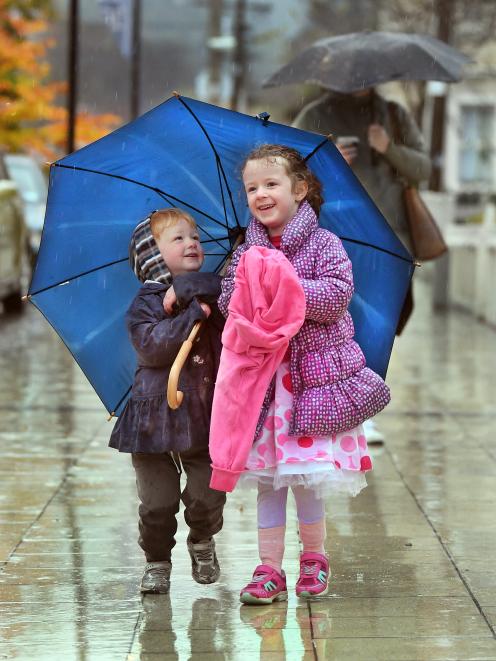 Siblings Eli (2) and Isobel (4) McConnell share an umbrella as they walk to daycare near the University of Otago yesterday. PHOTO: STEPHEN JAQUIERY
More wild weather is on its way for the South with severe gales expected to hit tomorrow evening.

The MetService has issued a strong wind watch for Dunedin, Clutha, Southland and Stewart Island for tomorrow between 11pm Saturday and 9am Sunday.

It said an active front  preceded by gale westerlies and followed by gale southwesterlies, was forecast to move north across the lower South Island during Saturday night.

People were advised to stay up to date with the latest forecasts in case parts of the watch were upgraded to a full warning or new areas were added.

This comes after wild weather kept much of the South on high alert yesterday morning as heavy rain and winds up to 140kmh lashed coastal Otago and Southland.MetService meteorologist Curtis Hayes said Edendale received the highest amount of rain, recording 42mm between midnight and 2pm yesterday.

Temperatures in some parts fell to near zero.

"We still have a number of customers who are without supply over the Southland and Otago regions. We were prepared for the onset of this storm and have staff and contractors working to restore supply to the affected customers."

The strong winds forced the container terminal at South Port, in Bluff, to close on Wednesday, as several containers fell into the berth and container yard.

South Port chief executive Nigel Gear said the containers that had fallen off a five-high stack would have to be lifted by crane.

"It's a bit of a jigsaw but we've got some pretty clever guys."

Mr Hayes said the weather was expected to settle across the region today, but strong winds would return tomorrow.

"A strong, disturbed southwesterly flow covers much of the country through to Monday.

"About coastal parts of Southland, Clutha and the Otago Peninsula, there is moderate confidence of periods of severe west-to-southwesterly gales from Saturday evening to Monday afternoon.

"But they're not expected to be as dramatic as what we've just had."