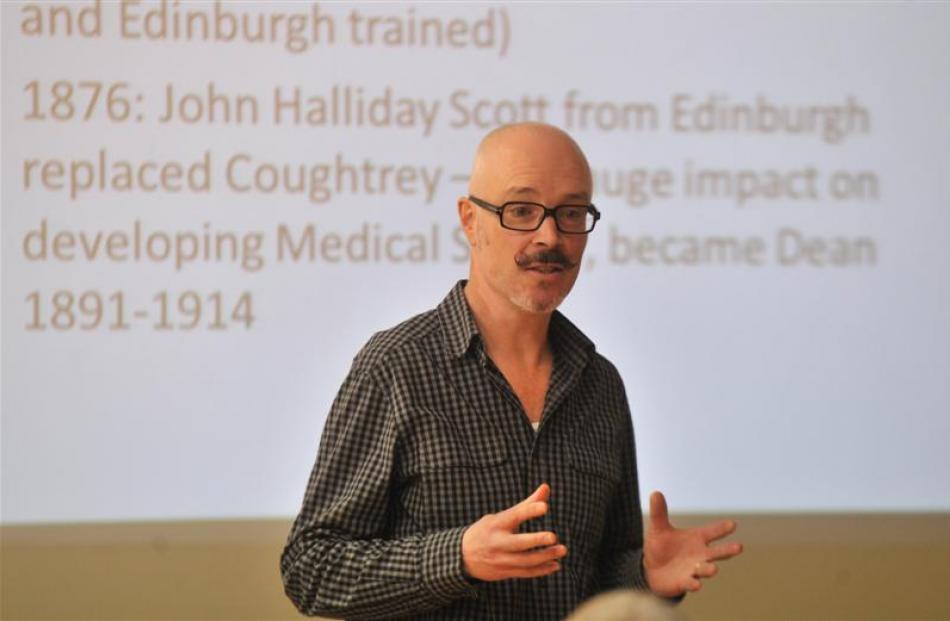 Prof Robin Gauld, director of the University of Otago Centre for Health Systems, discusses at a recent seminar in Dunedin the high turnover of overseas doctors. Photo by Linda Robertson.

New Zealand is the largest importer of overseas doctors in the OECD, but many soon return home and the ''revolving door'' has ''tremendous cost implications'' for our health system.

That comment was made by Prof Robin Gauld, who is professor of health policy at the University of Otago, and director of the Centre for Health Systems.

His remarks came during a recent public talk, focusing on research he undertook last year during his NZ-UK Link Foundation visiting professorship at the London School of Advanced Studies.

His talk was titled ''Why doctors (and nurses) leave the NHS for New Zealand and, once here, don't stay long''.

The New Zealand health system was, in proportionate terms, the highest importer of overseas medical graduates in the OECD.

And the New Zealand system was reliant on such graduates and ''would not function without them'', he said.

Overseas-trained doctors now comprised 54% of rural doctors and about 38% of urban doctors in this country.

Concerns were being expressed in Britain about the loss of UK-trained doctors, with one UK newspaper stating such doctors cost 610,000 to train, but nearly 3000 doctors a year were leaving for ''a life in the sun'' in Australia and New Zealand.

The UK might be losing doctors and nurses, but they provided a ''crucial lifeline'' in New Zealand, Prof Gauld said.

There was a long tradition of medical migration from the UK to New Zealand, and British-trained doctors had played a key role in the early development of the Otago Medical School.

About half of the 3500 registered international medical graduates (IMG) in this country at present were from the UK.

But the IMG turnover was higher than for New Zealand medical graduates and the ''revolving door'' of overseas doctors had ''tremendous cost implications'', including in recruitment costs.

Doctors from North America and the UK were more likely to stay for a year or two, often alternating time as a specialist locum with time off to travel.

But just 35% of doctors from the US and Canada remained in New Zealand a year after initial registration, compared with 70% from Asia.

For UK doctors, 53% had stayed after one year and 30% after two years.

Prof Gauld said his research showed UK doctors and nurses often found New Zealand better to work in than the UK, and some doctors were opting for New Zealand because of concerns with aspects of working in the NHS (National Health Service) in Britain.

More should be done to learn from the large amount of knowledge and experience brought in by overseas doctors, and he suggested developing a national network or register of skills and experience.

• Prof Gauld had worked with Dr Simon Horsburgh, a lecturer in epidemiology at the Otago department of preventive and social medicine, in undertaking a survey of 1354 UK-trained medical registrants within the past 10 years, and 293 UK-trained nurses.