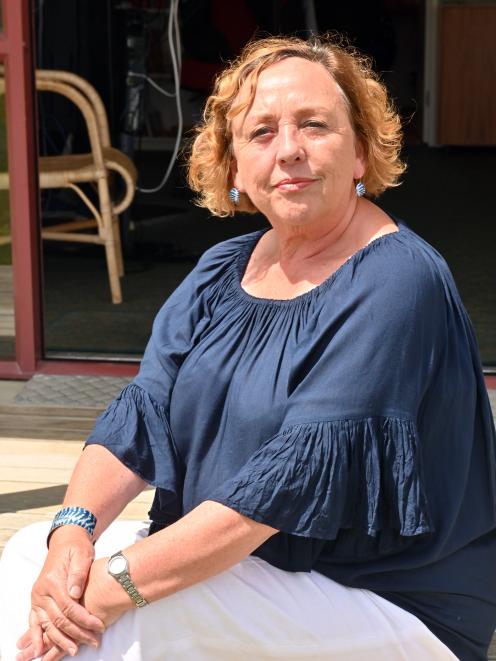 Suzanne Ellison
The Puketeraki Marae at Karitane has just hosted a group of 110 visitors, mainly rangatahi (young people) from Hastings who had travelled south by bus in a Hikoi of Hope ("long journey of hope") to mark the 25th anniversary of Te Taitimu Trust. This trust undertakes youth education and development and works with high needs or high-risk Maori and Pasifika people, and with communities. Reporter John Gibb discussed these recent developments with Huirapa runaka (sub-tribal council) manager Suzanne Ellison and trust chief executive officer Zack Makoare.

Growing  links between the Puketeraki Marae at Karitane and a Hastings youth education trust are proving positive in both places, organisers say.

The Puketeraki Marae has just hosted a group of 110 people, mainly rangatahi (young people) — the largest group from Hastings the marae has hosted since the relationship was developed about eight years ago.

About 20 other southern rangatahi and supporters were also accommodated at the marae, and many of the visitors slept in tents during the five-night stay.

"There’s no time for screens and phones.

"They’re so busy, they’re so full of energy, there’s too much to do," she said.

The stay at Karitane was part of a longer Hikoi of Hope, and the young people had visited the University of Otago, with which the runaka had strong links.

"That opens up a whole world of opportunity for these young people," Ms Ellison added.

Te Taitimu Trust is a non-profit Maori organisation based in Hastings; its chief executive officer is Zack Makoare, and it undertakes education and youth development work among rangatahi, both Maori and Pasifika.

"Our reason for travelling such a long way is to provide hope to our kids who struggle in life and don’t have the opportunity to meet some amazing people and wananga [education institutes]," the trust said.

After a long bus journey from Hawke’s Bay, the big northern group reached the Puketeraki Marae on Thursday of last week, and had headed north again on Tuesday.

"Zack brought the group on this amazing journey ... to mark the 25th anniversary of Te Taitimu Trust," Ms Ellison said.

"The Trust has an annual Big Camp, usually held in the Hawke’s Bay, that we have been taking a small group to for around seven years.

"In return Zack has been bringing a similar sized group to our annual Tamariki Hui [children’s gathering], held at Puketeraki Marae, usually in the July school holidays."

The programme was built around "southern activities and experiences such as curling and ice-skating, rock art and checking out the steampunk playground in Oamaru," she said.

"It is great to see the blossoming of leadership skills among our young people from their involvement with the camps as well as the growing insight our hui leaders are gaining into working with taiohi [young people]," she said.

To mark the southern visit, Tauranga-based street artist Mr G, who has links with the trust, created a large-scale portrait of Karitane kaumatua Hoani Matiu who died in 1944.

Hosting about 130 people at the marae had also provided an incentive to put some food recycling aspects of the runaka’s climate change strategy into action, she said.

Mr Makoare was grateful to the Puketeraki Marae, especially Huirapa project leader Aroha Ellison for long working collaboratively on the successful idea to host the hikoi.

Earlier programmes had developed over about seven years, and a humble approach and "working behind the scenes" had been the secret to the success of the recent marae visit, he said.

"To raise a child takes a special village of people," he said.

"At the end everyone was singing and dancing together ... kotahitanga [unity] happened," he said.