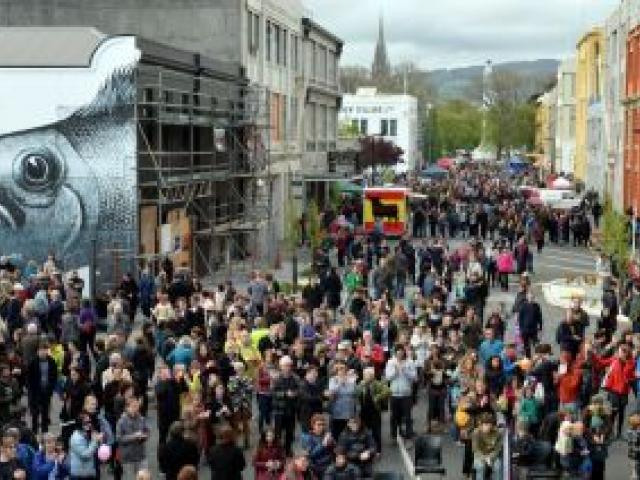 Crowds flock to the Vogel St Party in the warehouse precinct on Saturday, held to show off efforts of developers and the Dunedin City Council to breathe new life into the historic area. Photo by Gregor Richardson.
A packed Dunedin warehouse precinct at the weekend exceeded the expectations of organisers of the Vogel St Party, held to celebrate the ongoing renewal of the heritage area.

The city was invited to the event that included tours of historic buildings and a chance to see some of the latest in street art, and the city turned up.

The Saturday event in Vogel St filled with people during the afternoon, and the man at the heart of the precinct project, Dunedin City Council acting urban design team leader Dr Glen Hazelton, said police had suggested crowd numbers there may have been about 5000.

With lines of people arriving and leaving during the event, many more than that would have attended.

''We were just stoked. We couldn't believe it. So many happy people,'' Dr Hazelton said.

Three years ago, the council agreed to spend $500,000 to help improve the look of the area, with the aim of encouraging more private investors and those already working in the area to continue fixing up and reusing historic buildings.

The council has provided everything from street furniture to LED street lights, cycle racks, footpath layout changes and plantings.

The street party included music from a stage at the Jetty St bridge and street performers at the Queen's Gardens end, with food stalls and more in between.

As the day progressed, the street evolved into an active art space,as international street artists filled 10 wall spaces, as part of the Dunedin Street Art Festival.

Dr Hazelton said he was ''pretty overwhelmed'' at how successful the event was.

Most food vendors had run out of food by about 6pm or 7pm, so the event was a big success for them, as well, he said.

Puppet shows, children's stencil art workshops and one of the main attractions, tours of buildings, had been booked out.

''We could have sold them out thousands of times.

''To me the most successful thing was the huge range of people there; plenty of families.

''There was just a really good vibe to it.''

Dr Hazelton said a lot of people drove past the precinct on the one-way system, and had no idea what was happening there.

The event had shown the work done, and said to residents: ''this is for you to enjoy now.''

Partygoers included Erin Dellow-Kane, of Dunedin, who said the mixture of old buildings and modern art gave the event a fantastic atmosphere.

''It's very unique. There's a lot of hipsters around - young arty people.

''It's awesome to see this part of town thriving again.''

Those on the street were very impressed with the Vogel St Party.

Panashe Gwavava (15), of Zimbabwe, said it was stimulating.

''It's great how the city has brought life back to this old place.

''It's inspiring for young people. The street art and music is very urban.