By Hamish MacLean
0 Comments
An archaic timepiece - a piece of maritime history - has been refitted above  Port Chalmers.

"Once I get that ball on, I’ll be able to have a restful sleep at night," Mr Woods said.

"There’s a lot of maritime history there to see - after all those hours, it’s come together." 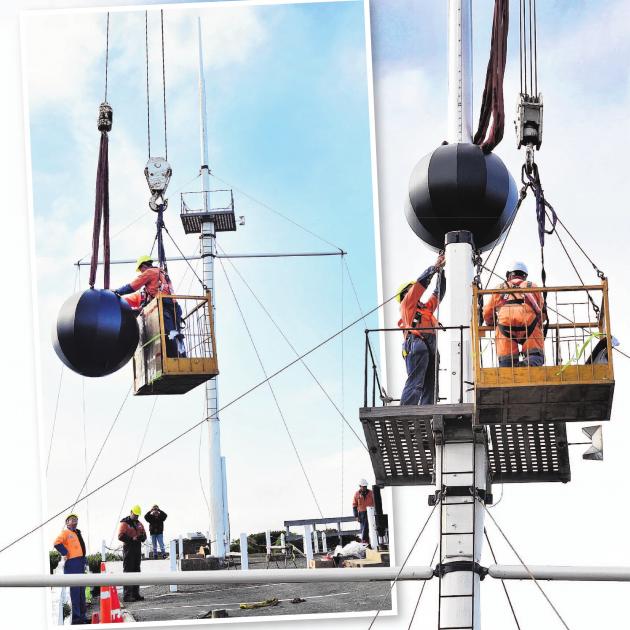 More than 150 years after one was first installed at Port Chalmers’ Flagstaff Lookout, crews from AmberTrax and Stark Bros install a timeball above the seaside suburb. PHOTO: PETER MCINTOSH

The 120kg marine-grade stainless steel time-signalling device, now obsolete, was made in Christchurch by Stark Bros.

It was painted black to increase its visibility from a long distance, Mr Woods said.

He had tested it and could see the flagstaff from as far away as St Leonards, nearly 6km from the lookout.

From that date, just as it did for a decade in the late 19th century, the timeball would rise then drop to mark 1pm every day.

The original timeball at Port Chalmers was used daily from 1867 to 1877 so ships’ officers could set their chronometers, used in navigation.

In April 1882, the service was reinstated as a weekly service following a petition from 11 shipmasters, a history of the timeball provided to the Otago Daily Times outlines.

Port Chalmers in about 1905, showing the timeball on the hill. PHOTO: TE PAPA
The timeball continued to be used until 1910, when its original function was discontinued. However, it remained practical until 1931 as it warned local fishers of high seas outside Taiaroa Head.