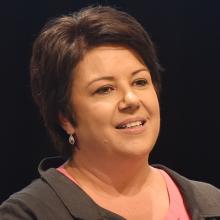 Paula Bennett.
The Government has been accused of avoiding its responsibilities after research showed homelessness rates in Dunedin have increased by 70% since 2001.

This comes as Social Housing Minister Paula Bennett last night said she did not read the University of Otago, Wellington, research because of ''inaccurate'' statements made by one of its authors in an accompanying media release.

Methodist Mission Southern director Laura Black said the Dunedin survey findings were not surprising, given the climate of rising house prices and the lack of good entry-level employment opportunities.

She believed the situation in Dunedin would have become worse since 2013, as some people were still struggling to find adequate housing after last June's flood.

On top of that, house prices continued to rise.

''I'm really worried about what the impact house price rises are going have on family budgets.''

The findings were yet more evidence the Government needed take regional development more seriously as a means to increase the number of employment opportunities.

Report author Dr Kate Amore yesterday highlighted the finding more than half of all homeless adults in New Zealand were working or in study and called for the Government to take the issue more seriously.

''The Government has attempted to distract the public from the housing crisis by focusing on the semantics of the word 'homelessness' and by attempting to 'prove' that people living in cars do not want help.

''These are disturbing displays of the Government continuing to avoid responsibility for a severely disadvantaged population who are at the hardest edge of our housing crisis.''

Ms Bennett hit back in a statement provided to the Otago Daily Times, saying she had not read the report.

''I haven't read the report because I read the accompanying press release and found it to be inaccurate and political commentary instead of presenting the facts which are that this Government takes homelessness seriously.''

The Government was investing a record amount supporting emergency housing providers, providing wrap-around support for the homeless, and ''most importantly'' increasing the housing supply.