Despite fire tearing through a Dunedin cathedral, its dean hopes services will resume on Sunday.

Emergency services were called to a blaze in the roof of St Paul’s , in the Octagon, about 3.35am yesterday.

At its height, seven appliances and one aerial appliance were at the scene. Crews contained the blaze at the Anglican church before sunrise.

Fire damage was confined to the area between the ceiling and roof above the altar, though there was water damage to parts of the cathedral’s interior and the crypt below.

Dean the Very Rev Dr Tony Curtis said he was woken with news of the blaze about 4am.

"You always fear the worst, but actually we have been very lucky.

“We are going to carry on praying for and caring for the people of Otago and Southland. We have got a great city here in Dunedin — people will rally around."

He hoped services would resume in the short term. 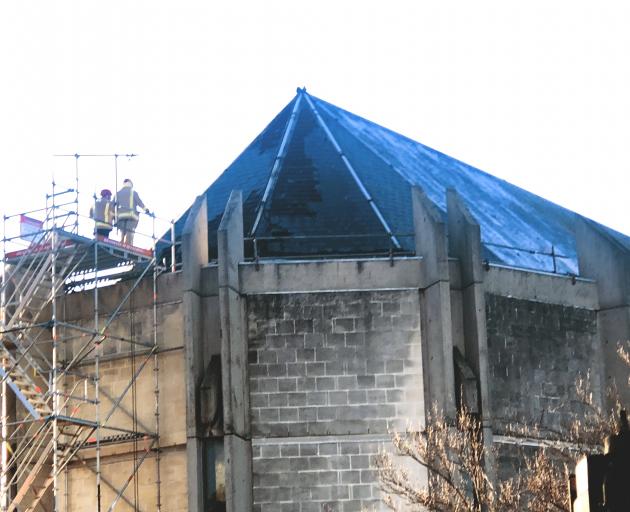 He had a couple of theories about the cause, which he expected to confirm in the next week.

He said the efforts of firefighters helped prevent the blaze from spreading.

Dunedin City senior station officer Rob Torrance confirmed damage looked worse on the outside than inside.

The height of the building made the fire more difficult to contain than normal, but fire crews had been quick to arrive, he said.

The ceiling was Pinex, a wooden softboard material, which had absorbed water, Mr Torrance said.

"That whole section [of the ceiling] may need replacing."

Dr Curtis confirmed the church was insured and an assessor was at the scene yesterday.

Dunedin Mayor Aaron Hawkins said it was "heartbreaking" to wake up to news of the fire.

He had contacted both the Dean and the Anglican Bishop of Dunedin, the Rt Rev Dr Steven Benford, to offer a meeting to discuss the role the city might play after the fire.

Work started on the Oamaru stone-walled cathedral in 1915, after the diocese spent 10 years raising the £20,000 needed for construction.

In 1971, a modern chancel, designed by Ted McCoy, was added, built of concrete and sheathed inside and out with Oamaru stone to match the rest of the building.

Last year, a celebration service was held at St Paul’s, marking 100 years since it was consecrated on February 12, 1919.