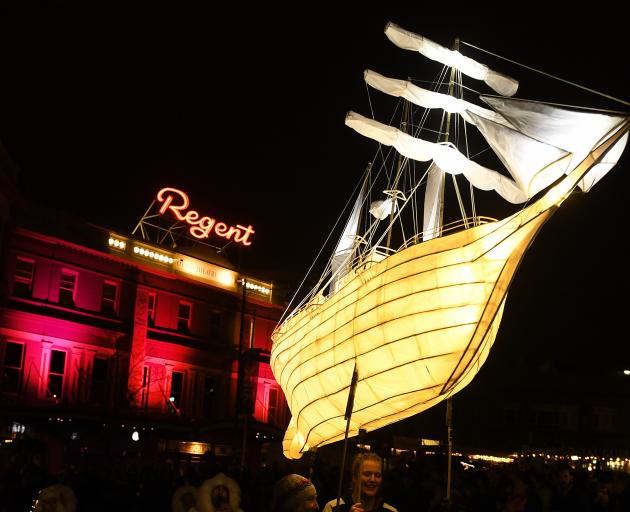 A giant lantern in the shape of a ship at last year's Midwinter Carnival. Photo: Stephen Jaquiery
Artistic life is starting to return to Dunedin following Covid-19 lockdown, as concert venues prepare to reopen and the cancelled Midwinter Carnival considers an alternative event.

The trust which manages the carnival, which attracts thousands to the Octagon for its annual lantern parade, called off this year’s event last month.

However, it hinted something smaller might be organised, and trust chairman Paul Smith said yesterday that the trust retained that ambition — especially if the Government, as anticipated, opted next week to lower the alert level to 1.

"We are hopeful we can finish some of the work we have started on our giant lanterns and keep our artists making things ... it is still important for us to mark the seasons and keep in touch with our audience," Mr Smith said.

"We still hope to do something this winter, but it will be later than the usual carnival dates."

The trust, which last year created installations in three central city malls, was exploring repeating the exercise, and had also applied for funding for a possible summer event, Mr Smith said.

Dunedin Venues, which operates Forsyth Barr Stadium and the town hall, reopened at Level 2 and had since hosted some small-scale business events.

"We are hopeful that next week's announcement will see a move to Level 1 very soon so we can welcome back larger crowds to our venues," marketing and communications manager Kim Barnes said.

While international concerts appeared to be quite some time away given border restrictions, Ms Barnes hoped Dunedin Venues would be hosting live performances once Level 1 came into effect.

All the firm’s events would be carried out in accordance with Ministry of Health guidelines, she said.

"We will be able to maintain contact tracing through the event entry ticket, there will be hand sanitising stations throughout all of the venues along with posters reminding attendees of good hygiene practices."

The firm, which laid off several employees at the start of the Covid-19 crisis, would review staffing levels as business revived, Ms Barnes said.

Dunedin singer/songwriter Nadia Reid has stolen a march on other local performers and will play twice in Wellington tonight, her first shows since March.

"As amazing as the internet is, live streaming doesn’t quite give you that connection with the audience, so I’m looking forward to being back in the same room as people."

Ms Reid, who had been due to fly out to New York just as New Zealand went into lockdown, had rescheduled many of her international shows and still hoped to fulfil some already uncancelled dates.

"I think everyone is feeling a bit nervous being back out in the world again, getting on the plane yesterday was a bit strange," Ms Reid said.

"Being out and about today there is a sense of normality which is a nice feeling."