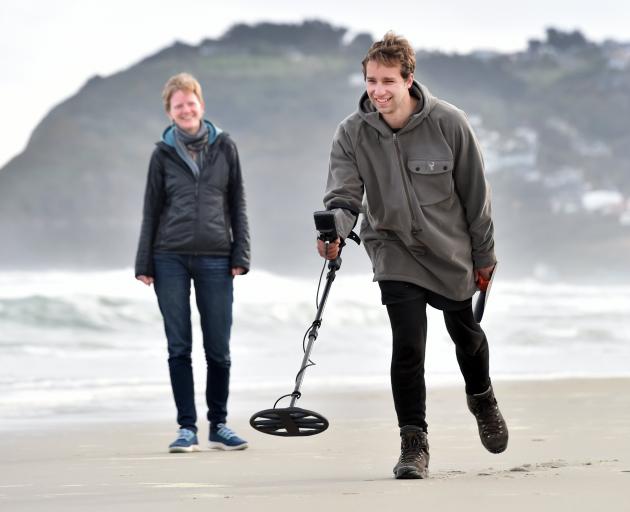 Dunedin metal detectorist Ben Goldsworthy continues his search for a suitable wedding ring, which he will use to propose to his partner Bryony Alden. PHOTO: PETER MCINTOSH
Could this be the moment?

Every time Ben Goldsworthy’s metal detector goes off, he gets a rush of excitement, because it could be his future wife’s engagement ring buried under the ground.

The 28-year-old started metal detecting three months ago after seeing people do it on Facebook and YouTube.

So far he has found a handful of pennies from the 1920s and a silver ring.

But he still has not found what he is really looking for — something with a precious stone on it that he could give on bended knee to his girlfriend.

‘‘I found a silver ring, which I gave to my partner.

‘‘But I told her it was not an engagement ring because it was only worth about $40 — I’m not that cheap.

‘‘I said if I find something really nice, I’ll give it to her and we’ll call it an engagement ring.

‘‘We’ve talked about it and she said it would be great because it would be special for both of us.’’

Mr Goldsworthy said metal detecting started off as a hobby, but the thought of marriage had given him an incentive to go out most days — rain, hail or shine — and search Dunedin’s beaches for ‘‘that something special’’ that would change their lives.

‘‘It’s sort of like a rush when the detector goes off. You never know what you’re going to find.

‘‘I enjoy the not knowing. It’s always a surprise what you pull out of the ground.

‘‘Dunedin’s an old city and people will have dropped things over the years, and you never know when you’ll find something like that.’’

Mr Goldsworthy said if he did find jewellery or something really expensive, he would hand it in to Dunedin Police first and see if anyone claimed it.

‘‘But generally, it will get back to me because a lot of the stuff I find might have been down there for 50-odd years.’’