By Hamish MacLean
0 Comments
Ordinarily firefighters put fires out, but yesterday they burned a Dunedin house to the ground.

A two-day training exercise in Emerson St, Concord, wrapped up yesterday as crews from Invercargill and Mosgiel razed what once was a generous 1990s four-bedroom family home.

Firefighters furnished the house with donated furniture from the Salvation Army and then went room to room setting the place on fire.

Firefighters entered the house in teams of four trainees and two instructors and set a small fire in one of the rooms.

They then let the fire build up to discuss the science behind what was happening.

Invercargill City Station firefighter Harry Finnerty was in the last team to enter the house.

As one of the newer career firefighters in the brigade he had never been inside a burning house.

The smoke layer inside was thick and it was difficult to see, but he saw how fast fire moved.

"It was rolling out the door, it was coming over the top of our heads."

It was very hot, he said. 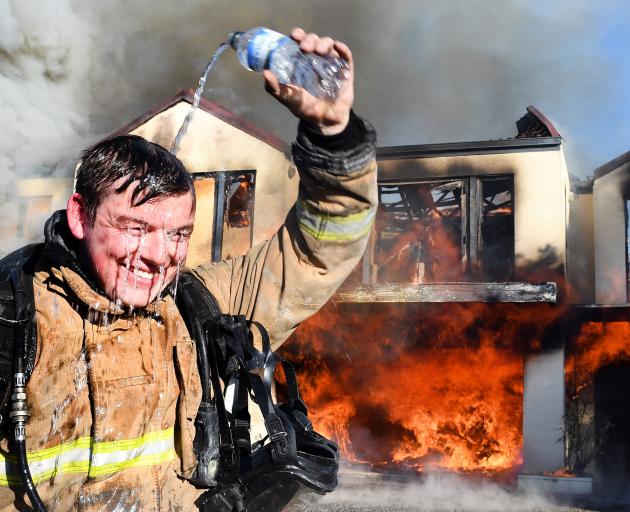 Invercargill City Station firefighter Harry Finnerty cools off after setting alight an Emerson St, Concord, house in a training exercise in Dunedin yesterday. PHOTO: STEPHEN JAQUIERY
"Normally, we put fires out, but in this instance it was more of a training situation — so we could actually see the stages of the fire and the development.

"For this last one we just let her go.

"This is compartment firefighting, which is quite dangerous to firefighters, because if they go in and there’s no oxygen and they open up a door, the oxygen can come in and cause a backdraft."

If the fire had been real, firefighters’ safety, escape routes and access to water would all be top of mind.

If a person was reported inside, that would play on firefighters’ minds, he said.

However, yesterday as the exercise drew to a close, firefighters instead posed for a group photo as the house burned behind them.

The first half of the house was destroyed by Dunedin fire crews on Thursday.

Developer David Grant said the site would be used for a 39-section development with 10,000 native trees and a nature walk planned.

Sections would be on sale within the next two months, he said.