By Molly Houseman
0 Comments
Dunedin was on fire yesterday.

Temperatures soared to 29.6degC, making it the hottest place in the country, but the heat brought with it a spate of fires across Otago and Southland.

MetService forecaster Gerard Bellam said Dunedin’s close-to-record temperature — which is 30.2degC for this time of year — was closely followed by other South Island centres. 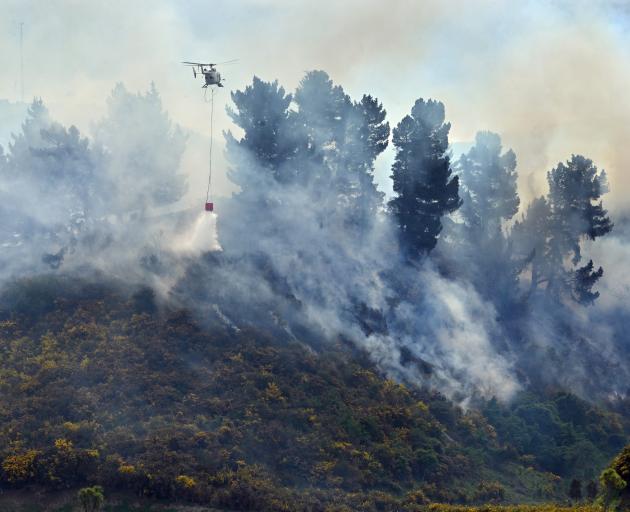 A helicopter drops water on to a gorse fire off State Highway 1, near Waikouaiti, yesterday. PHOTOS: GERARD O’BRIEN
But while many revelled in the heat and flocked to the beaches, fire crews were busy putting out fires and working against gusty northwesterly winds.

Three helicopters fought a large gorse fire in a gully north of Dunedin that had covered 5ha by 6.30pm.

A Fire and Emergency New Zealand spokeswoman said wind and hot weather were contributing to the blaze, close to State Highway 1 south of Waikouaiti.

Crews from Waikouaiti, Palmerston, Hampden, Willowbank, Waitati and a Dunedin command unit responded, and the helicopters used monsoon buckets to dump water on the blaze. No properties were compromised.

Earlier, a burn-off got out of hand due to high winds at the St Clair Golf Club, in Hillhead Rd.

Firefighters at the St Clair Golf Course, in Hillhead Rd, yesterday.
A crew from Lookout Point and two from Wakari brought the fire — which began about 11.30am and covered about 200m by 10m — under control.

An Otago Daily Times photographer at the scene said it appeared the fire was in piles of slash or scrub beside the 12th fairway.

Crews were also kept busy by a gully fire in Balclutha that covered about 2ha, as well as a grass fire in Middlemarch.

While it was a warm start to Labour Weekend for the South, wild weather is set to end it, which may help ease dry conditions.

The "warm to hot" weather and gusty northwesterly winds quickly changed to a cold and wet spell, Mr Bellam said.

Sizzling South Island Sunday. Provisionally, for October these temperatures are:

But that was good news for some, he said.

"Much of Otago, especially as you look up towards North Otago. is quite dry at the moment. We have got quite a soil moisture deficit on the farms there.