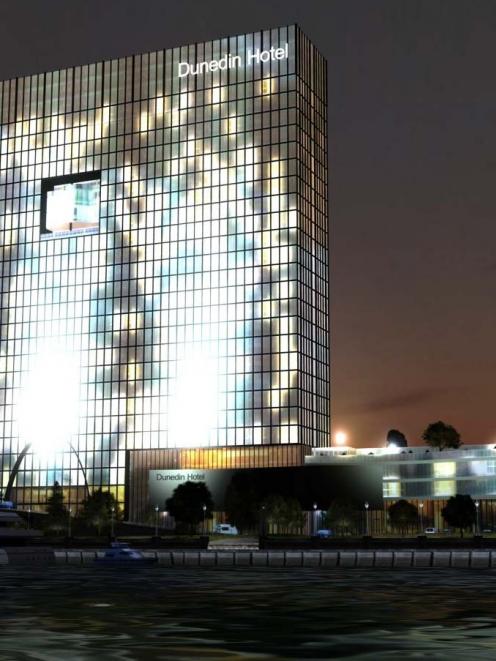 Artist's rendition of the proposed hotel. Photo supplied.
Preliminary construction advice on Dunedin's controversial waterfront hotel proposal says it is ''entirely feasible'' to build a 28-storey hotel on the soft soils of the city's foreshore.

It would simply necessitate careful planning and site management, including some ''significant foundation solutions'', and does not present any insurmountable issues, a construction effects assessment of the project by Andrew Holmes, of Hawkins Construction, says.

The assessment is one of five pieces of information requested from Betterways Advisory Ltd by the Dunedin City Council committee considering the company's application for a resource consent for the project, before the hearing resumes on Monday.

The company was asked to provide new images of the hotel, which it did last month, an assessment of environmental effects covering construction and wind disturbance, a report from a recognised landscape expert and a demonstration of the hotel's height.

The assessment of construction effects and a proposal for a consent condition about wind effects have been provided and copied to submitters.

In the proposed wind-effects consent condition, supplied by Opus International, it was suggested that thresholds that would need to be met be identified and tested via wind tunnel once the final design was known.

The proposed condition also set out a provision for adjacent landowners to have mitigation measures offered to them if, as a result of the building, wind speeds breached the condition thresholds.

Mr Holmes said his advice aimed to identify the challenges and set out the underlying construction principles of such a project, which could be identified even in the absence of a geotechnical investigation or final building design or construction programme, as was the case here.

He said that because the site was closely bounded on all sides and the location of cranes and the airspace they could use was restricted to the south and west because of the railway lines, the project would require high standards of site housekeeping, construction programming and traffic and public management.

Because the site was on reclaimed land close to Otago Harbour, it was understood the water table would be about 3m above the finished basement level.

That, combined with a perceived low soil bearing capacity, the potential for liquefaction and the structure's tall, slender shape, necessitated significant foundation solutions, possibly including a selection or combination of sheet piling, diaphragm walls and pile foundations.

He described how draining of the site could be carefully managed, as could material storage off-site and access to the site, which was envisaged to involve one entrance only, on Wharf St. Although the project was still in the planning stages, he estimated an overall construction period of about three years and three months.

Longer work shifts, night shifts for interior work trades and greater use of prefabricated internal units such as kitchens and bathrooms could reduce the project time.

He concluded that, by using appropriate construction practices, it was entirely feasible to construct the proposed hotel on the Dunedin foreshore.

''It is acknowledged that the site has a number of constraints; however, this is the case for many sites. Such constraints simply necessitate careful planning and management. I do not consider that this site presents any insurmountable issues.''

Most of the submitters said nothing in the latest round of information altered their opposition to the project.

Many said they were dismayed Betterways declined to answer some of the committee's requests, and the height and visual impact of the building were still their main reason for objecting to it.