Hotfooting it from Wanaka to Dunedin 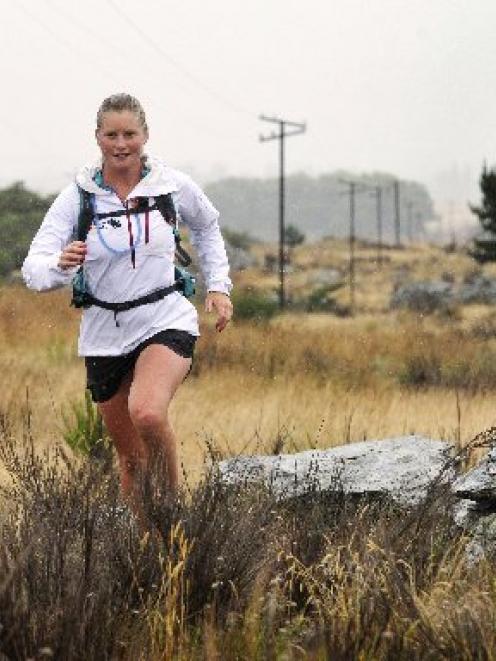 Anna Frost runs near Middlemarch yesterday on her cross-country journey to Dunedin. Photo by Gerard O'Brien.
When she didn't have a ride organised to Dunedin after a friend's Wanaka wedding last weekend, Anna Frost (30) decided she would just run home.

And she was not going to take the easy way either.

The mountain and trail runner from Dunedin, who spends most of the year out of New Zealand running up mountains and along trails professionally, started from Queenstown, where she had gone with her family after the wedding, on Monday and made it to Bannockburn via a track near Chard Farm and the Nevis Valley.

She then ran over the Cairnmuir track to Clyde, took the Otago Central Rail Trail to Lauder, through to Waipiata and, by Thursday had reached Middlemarch.

It was a nice way to get a proper look at a place, she said.

She left Middlemarch about 5pm yesterday to run cross-country to Dunedin.

Never having run off-road to Dunedin from Middlemarch before, she invited friend and runner Matt Bixley to join her, but he had other obligations during the day, so they were running at night.

Until then she had run solo, although a few friends had joined her for an hour or two here and there, and she only had with her a small backpack containing a change of singlet, a toothbrush, toothpaste, sarong and credit card.

"Which is all you need really isn't it?"

Miss Frost said she expected to reach Dunedin by 1am or 2am today.