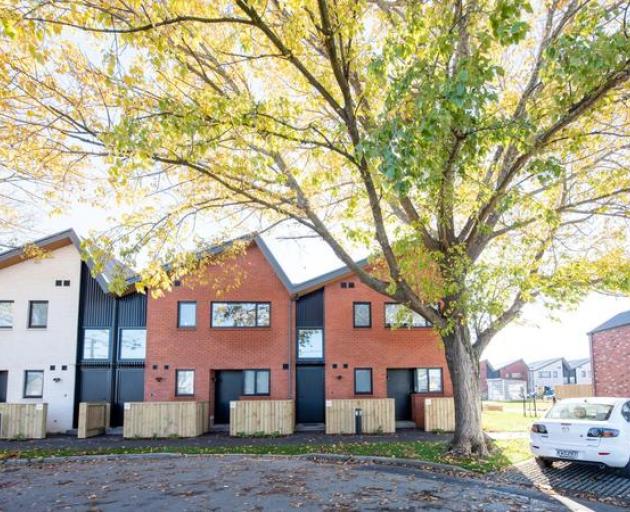 New standards would mandate the planting of native trees for every 250sq m of area, and minimum levels of native planting on property boundaries.

A report has been created by council staff ahead of a hearing to consider zoning changes to the 2nd Generation District Plan (2GP).

It revealed several public submissions showing concern that denser housing would lead to a loss of green space and vegetation across the city.

The report acknowledged that increased housing density would reduce the amount of green space on private land, and proposed the new rules to mitigate the potential losses.

While the new standards, if adopted, would only apply to new developments in the newly rezoned areas, it was also recommended that consideration should be given to applying them to developments in all General Residential 2-zoned properties as part of a future plan change.

Under the proposed rules new developments in the intensification areas would need to plant one native tree per 250sq m of the site area in question.

Trees would need to be at least 1m tall at planting, capable of growing to at least 3m tall, and set back a minimum of at least 2.5m from all boundaries.

Where properties are next to roads, 50% of road boundaries would need to be planted with native trees, shrubs or ground cover, but not lawns.

However, if there was a driveway on the boundary, the ratio would change to 75% of the remaining boundary area.

The second hearing on Variation 2 of the 2GP will consider submissions on the intensification of existing housing through rezoning, and is scheduled to be held on for November 3.

Parcels of land in Mosgiel, Green Island, Concord, Mornington, Roslyn, Maori Hill, Wakari and Anderson’s Bay are among those being considered for rezoning.

How stupid can you get !!!
There are only 11 deciduous native trees and most are Nth Is species
Higher density housing creates more shaded space in the winter as it is, let alone requiring the addition of more shade from trees
Narrow tree lined streets cast more shadows at night reducing the effectiveness of street lighting and so make them less safe to the public
Height and position of trees are a considerable source of neighbour conflict because of shading, especially in the winter months reducing passive solar heating of homes
I'm guessing here but I assume that the idea behind this to facilitate bird habitat
If this is the case then there are better ways of achieving this, our Town Belt, parks and Gardens are good examples
We don't need more stupid rules dreamed up by 'well intentioned' ideologue's, sitting in ivory towers !!!

Although the rules do seem overly complicated I think this idea is well overdue.
"Trees play a critical role for people and the planet. Numerous studies have demonstrated that the presence of trees and urban nature can improve people's mental and physical health, children's attention and test scores, the property values in a neighborhood, and beyond. Trees cool our urban centers. Trees are essential for healthy communities and people. The benefits that trees provide can help cities and countries meet 15 of the 17 internationally supported United Nations Sustainable Development Goals. This critical review provides a comprehensive argument that trees should be considered an important part of the equation by project managers and civic leaders as we collectively work toward reaching these sustainability goals." - The benefits of trees for livable and sustainable communities
Jessica B. Turner-Skoff,Nicole Cavender

Every well designed, high density urban area I have visited or lived in around the world has ample greenery without 3m high trees next to the houses
They have parks that are readily accessible via walkways within the housing block so they can be accessed away from the traffic
Often these walkways align providing access to schools and shops too
There a lot more creative options than creating stupid rules
The UN has nothing to do with how Dn plans its city
The DCC has proven they have trouble keeping stormwater grates and mud traps clean as things stand now, let alone making it harder for them

EXCELLENT! Can't wait to see the greening of Dunedin and every city in the world

Humm
Why is that ?
Do you not follow international news or just not think things through ?
https://www.theguardian.com/us-news/2019/oct/12/california-wildfires-los...
A Kiwi in the town of Kinglake was fined $50K for cutting down trees close to his house which was against the bylaws
He and his house survived.
https://en.wikipedia.org/wiki/Black_Friday_bushfires
Maybe something closer to home would get your attention
https://www.odt.co.nz/regions/south-canterbury/homes-destroyed-devastati...
I wonder how they sleep in these houses when a hot westerly is blowing
https://www.odt.co.nz/regions/wanaka/concerns-fire-risk-not-being-addressed

Yay, another tax. Funny, I thought we paid council to do this sort of thing and be caretakers of the city and environs. Maybe I got that wrong..

As long as they are the right trees in the right place and not necessarily natives. Other trees have positive attributes too, use what suits. BUT don't plant near drains or foundations, don't plant ones that in 10 years will cause problems with neighbours losing light, or next to roads where idiots can drive into them. So, good idea but....