Four fire crews will remain on guard overnight to protect properties from the devastating Lake Ohau fire that has already claimed at least 20 houses.

Fire and Emergency’s Incident Controller Steve Jones said that the 11 helicopters fighting the fire had been stood down at nightfall and would be back in the air at first light.

Eight ground crews will also be deployed to the fire front tomorrow to recommence the ground attack.

Six more properties were evacuated this evening in case the strong winds that have caused havoc with firefighting efforts picked up again overnight.

Scores of residents were evacuated earlier Sunday after the massive blaze tore through one of New Zealand's most idyllic lakeside spots.

Aerial footage shows several streets of homes at Lake Ohau Village in the Mackenzie Country have been destroyed by the fire, which is understood to have been sparked by an electrical arc from power lines.

In an update around 3pm, Fire and Emergency Incident Controller Graeme Still said the fire was burning over approximately 1600 hectares.

Eleven helicopters and seven ground crews were battling the fire, he said.

He had flown over the fireground this afternoon and he said he estimated that at least 20 homes had been damaged or destroyed in the village.

An Urban Search and Rescue team would be deployed to make a full assessment there.

"All residents are accounted for and we will have crews in the village overnight in case of any flare-ups," Mr Still said.

Due to the high winds it was unsafe for residents to return to their homes.

"I am very mindful of how upsetting it is for the residents. Their safety is our main concern at this time."

He said crews were working to steer the fire away from other structures and critical infrastructure, including the main power lines servicing Queenstown and Wanaka.

High winds meant the fire could not yet be contained, and he cautioned the situation could change rapidly with any shift in the wind.

The fire was headed toward open tussock country where there was scattered native scrub, and was threatening the Ohau Moraines Wetland Complex and the Department of Conservation’s ungrazed Tarnbrae Track area.

‘‘From what I understand it’s going to be very difficult to stop the fire before it gets into there,’’ Mr Kircher said.

‘‘There’s no sign of winds really helping, they continue to be a major nuisance."

He said farmers had suffered stock losses in the area dominated by sheep runs.

Dunedin man Andy Winneke caught sight of the blaze from where he was camping with his family. Photo: Andy Winneke

He said he was fielding phone calls from holiday home owners unable find out if there home was among the more than 20 in the village destroyed by the fire.

He had not seen the devastation first hand, and the mood at the welfare centre was at times tense.

"It is a very stressful time.

"There’s a lot of people feeling very stressed and upset as you’d expect and part of that is that for some it’s that they know their house is gone, and for others they just don’t know yet and it’s a pretty hard wait until they do find out.’’

There were about 20 permanent residents in roughly 15 houses in the village, with the rest holiday home owners.

Earlier, Prime Minister Jacinda Ardern said there had been property damage and homes lost in the fire.

"It's devastating for the community," she said.

She said Civil Defence and Fire and Emergency were on the ground doing "everything they can" to support the community.

Civil Defence Minister Peeni Henare confirmed that 20 properties had been affected and evacuated. "Approximately 90 people have registered at the local Civil Defence centre."

He said Fire and Emergency was "working hard" but were calling for more resources, given the fact that over the next few days high winds were expected.

"It's a wait and see but I expect that there will be boots on the ground within the next 24 hours."

He said the cause of the fire was still unknown.

At the moment, the priority of fire crews was containment.

A village home owner said his home was one of many to have been destroyed.

David Stone said the small village had about 50 houses, many of which he believes have been burnt down, including his own.

"We've been told it's gone. I've got near me a couple that's lived there for 27 years. Their place, two along for us, is probably gone, well I think it has gone.

"Sort of looking over the smoke that's coming down towards Twizel, it's very prominent to my left, it's been moving around - it's peculiar.

"There's a number of lifestyle blocks between the village and where the fire is currently. And probably they've suffered, as well."

Unfortunately some houses have been lost and we are working with those affected in the community.

He told RNZ that earlier this morning he had been standing near Lake Ohau watching a helicopter fight the fire right on the road, and three helicopters working over the village.

"There's been extraordinarily strong winds here - Ohau means place of wind, and it's certainly lived up to it."

Stone says cars have also been burnt out and the area resembles a war zone.

Senior Sergeant Paul Robertson said several agencies were supporting the evacuees, especially those who had lost their homes. 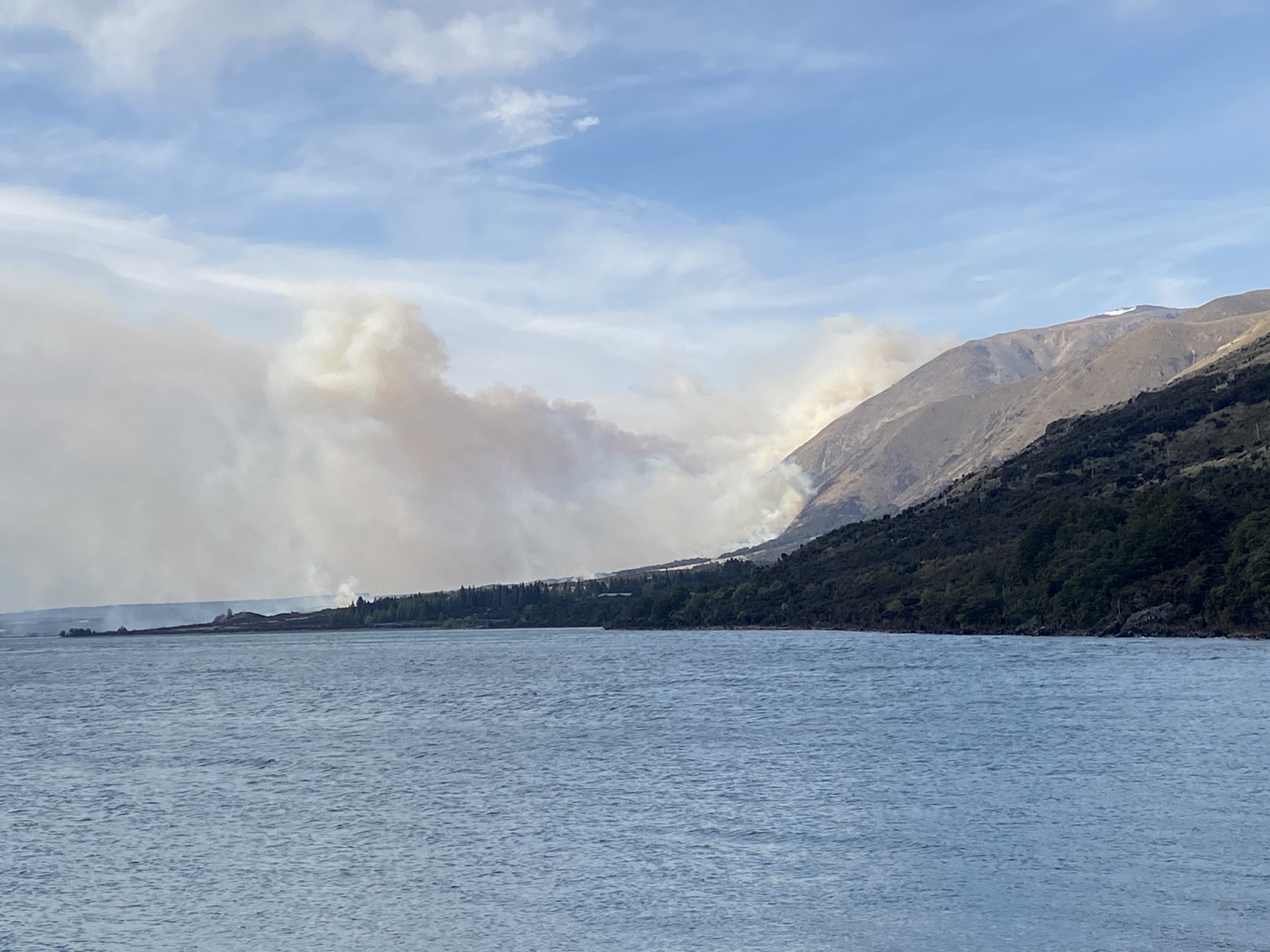 "We've got Civil Defence on board and my understanding is that we'll be contacting Victim Support as well. At this stage we believe we've lost some houses to the fire."

Robertson says residents were initially evacuated to the nearby Ohau Lodge, before the Waitaki Emergency Operations Centre was activated; controller Peter Muldrew says about 90 people evacuated from the village had registered at the welfare centre set up in Twizel.

Kircher said the village's residents were in a state of shock.

"It would be very understandable for them to be in that state of disbelief. I think it really hit home when I got an email with some photos from one of the homeowners with the subject line of 'end of an era for us'."

He had spoken to a number of people who had lost their homes to the fire and were devastated.

"They are pretty stoic about the whole situation." 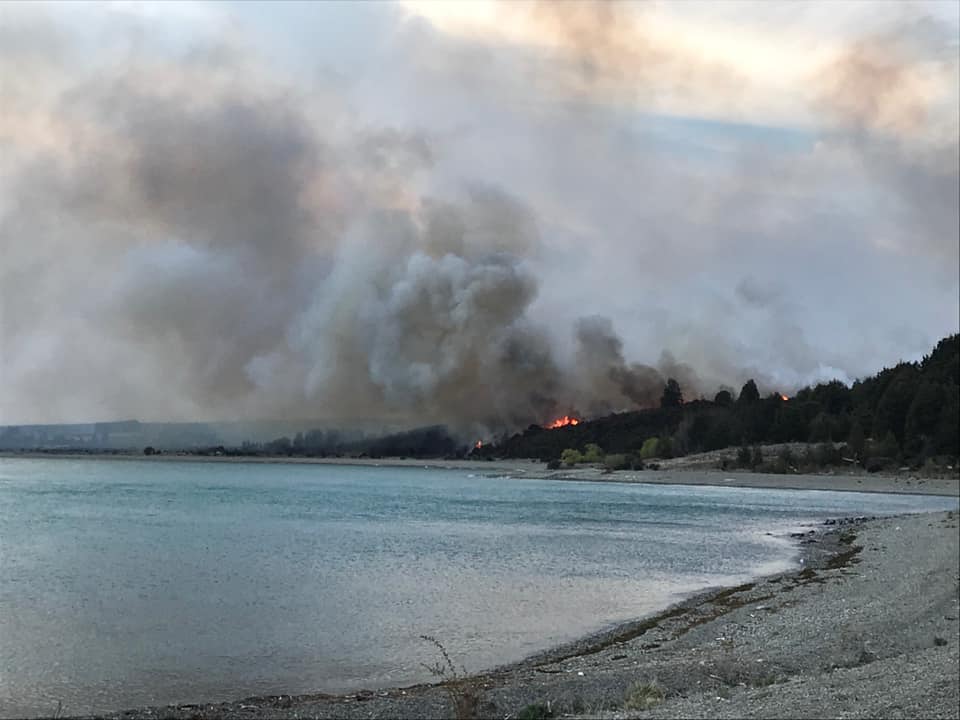 The fire started overnight and was continuing to burn on Sunday. Photo: Supplied/Gary Kircher Facebook
Kircher said there were still people who had been evacuated north and weren't able to get out of the area.

"They are safe. The fire looks to have moved past the village itself into more open space."

"The fire is still roaring - there is areas of pines where it would be very difficult to manage and then there is open space land which although might move quickly is not going to be as dangerous.

“The theory at the moment is it might have been started by power lines arcing and there have been gale force winds up there, right through to the coast,” he said.

Meanwhile, a man has described the horror of being separated from his father in the dark while driving through the "terrifying" blaze.

Hugh Spiers, owner of the Barn at Killin B&B, is one of about 200 people gathered at Twizel's event centre.

"It was like the movies. It was really really scary. The flames were big and smokey, thick with heat, there was no time to even take a photo," Spiers told The New Herald.

He received a phone call at 3am warning them to get out urgently.

"We couldn't get out our normal way, we had to cross country through a fire break."

Spiers has since reconnected with his dad, and all his family and guests have been accounted for.

He has owned his bed and breakfast for four years and said he had never seen anything like the fire he witnessed this morning.

"I have seen forest fires and the devastation it can cause, but this was way more frightening because there were people involved."

Spiers said there were reports another 100 or so people were at Lake Ohau Lodge where there is no power and phone lines had been cut.